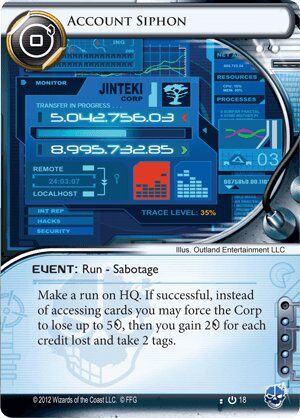 Run HQ. If successful, instead of breaching HQ, you may force the Corp to lose up to 5credit, then you gain 2credit for each credit lost and take 2 tags.

Illustrated by Outland Entertainment LLC
Decklists with this card

You can't spell 'account' without certain other words, one of which you might be tempted to call the supposed friend who takes this from their hand and sits there with that smug, 'Sorry, but...' look on their face. In a game that already has a lot of interaction such as: stealing agendas from your hand (please, not that one), peeking at your deck (oi!), destroying critical assets (FF-!) This one has a certain something that just stings.

Maybe it's the stealing of your precious life monies, without which nought may be advanced or popped. That lovely Snare(!), usually so >=D, will suddenly be all >=| , and you will be ='( as they trash it for nothing.

Maybe it's them getting double their money back, like some Netrunner God is going, 'Ha! Ya sure did good there kid. Look at that face, that sad, creditless face. Love it. Have a bonus.' With nothing but 2 tags given out as a consolation prize.

Maybe it's the moment when, after spending a whole turn clawing back some money (any money), they hit you with another.

There comes a point where you'll stop being angry, and just start sobbing. How can something so mean, so vicious, so cruelly one-sided be ok? This is the card most likely to expose you to the wider world of Netrunner, via you going 'Right, I'm going straight onto Youtube to hear how ridiculous this card is from everyone else' then going '...oh...I guess it isn't THAT bad actually...oo, a tournament video!"

Here's why it's not actually (that) bad,

Of course, there are some exceptions,

Basically it's still a painful card, but it's not as ridiculous as it first appears. If you have some defenses up on HQ and/or have some form of tag punishment looming as a threat, the runner's net gain will be less than you intitially think, and it won't hurt quite as much (it will still hurt a little).

As time goes on, you'll toughen up to the existence of this card. You'll learn to expect it, prepare for it, and after a while merely wince on the increasingly rare occassions where it manages to get through.

(Fear the Masses era)
Tirranek 605
If you can't ICE up HQ, you can still rez that SanSan (or Eve, or whverever) in the remote and make yourself broke. Sure they will get an access instead of cash, but if you really want to deny them money, there are other options to save yourself. — Goldstep 16 Jun 2016
I love your reviews. Please keep them coming. <3 — WayneMcPain 17 Jun 2016
9

(All That Remains era)
EfficiencyCommittee 216
6

If someone had to sum up the Criminal Faction in Android: Netrunner with one card, they might choose Account Siphon.

This card has defined Criminal since the dawn of running nets, even before Emergency Shutdown told Tollbooth to stuff it and Andy made the mulligan her man-servant. Tournaments of all levels have been won and lost by those who could play this card often or those who couldn't defend against it fast enough.

Experienced players don't need a review of this card because you've already felt Syphon's sting enough to know: Account Siphon is one of the defining cards in Netrunner. So, yeah, it's good. 10/5, or whatever.

Newer players may want to know why it gets all the hype. I will do my best to illustrate:

These two effects are renewed and exacerbated with repeated Siphons, thus creating the Siphon Recursion archetype.

In short, Siphon simultaneously prolongs the early game (when the runner is strong) and shortens the mid-game (when the corp is strong). It's a huge tempo hit that can and will determine how the rest of the game goes.

Oh, and if your opponent is playing criminal, always ice HQ turn 1.