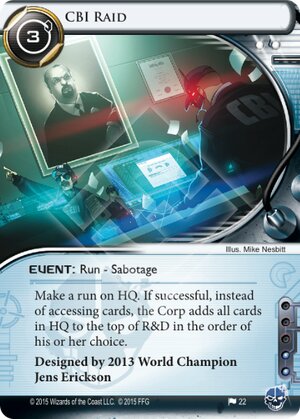 Make a run on HQ. If successful, instead of accessing cards, the Corp adds all cards in HQ to the top of R&D in the order of his or her choice.

Netrunner commentary has a pair of pet phrases: “Aggro” & “Control”. Broadly, these are archetypes where the former is attempting to shorten the game with tempo and pressure, while the latter is attempting to lengthen the game with answers and efficiency. However, both terms are completely meaningless in a vacuum, and specifically have no meaning without an understanding of “Combo”.

"Combo" is the dark object that creates and shapes the ideas of “Aggro” and “Control”: it is a statue upon which two spotlights aim that defines what sort of shape the card-game meta exists by its shadow.

Combo is ending the game by having a specific cohort of cards available plus the resources to use them. "Aggro" ends the game before the Combo is assembled. "Control" disrupts the Combo and uses their efficiency to keep above a critical gap in resources.

SEA-Scorch-Scorch is a combo. Runners are defined by if they slow down in order to deal with meat damage.

Biotic Labor–3/2 Agenda-Advance3x is a combo, especially at 5 points. Fast Advance defines the speed of the game.

Putting both of these combos together in Convenience Shop resulted in half the combos being placed on the MWL so that Runners didn’t have to “goldilock” their play- neither too fast or too slow.

Wireless Net Pavilion plus Paparazzi plus DLR is a combo. WNP’s errata reduced the number of copies you can have installed at one time.

Never forget that your understanding of the game is shaped by the way you define its terms; never allow yourself to fall into the trap of flawed definitions.

Both of the Convenience Shop combos mentioned above depended on the Corp having a multiple specific cards in HQ. CBI Raid gives Criminals (and other Runners) another tool to prevent these sort of cards from being assembled at the right time.

CBI Raid is not about winning games where you are already ahead or already behind; it is about giving you a tool that creates a strong line of play that gives you the best chance at winning.

Importantly, you should not use CBI Raid as the last click; the threat of running on R&D prevents the Corp from stacking their HQ on top of R&D and then natural-drawing the card they don’t want you to access. And because this choice is determined the step before the Runner has to commit their remaining clicks, you put the Corp in a position of having to make their best choice first, and letting you, the Runner, make your best choice. You are certainly allowed to gut-check R&D for those accesses, but you can also improve your board-state or your credit pool or your grip.

Card games are won and lost by giving yourself the best opportunity to leverage the blind luck of the draw through the plays you make many steps before you ever knew what card you were going to get. CBI Raid gives Corps fewer ability to get those draws without first burning through their clicks of things they already knew they should have.

tl;dr - Play CBI in Criminal decks that are willing to trade a card & credits to set the Corp back a turn.

Let's compare this with Account Siphon. Both are Sabotage Runs on HQ that drops the Corp tempo. Because they clash in roles, most decks will not be running both. This is where the similarities end.

The card I want to talk about here is Zona Sul Shipping.

Previously, criminals running Siphon and Zona needed a way to avoid tags - NACH. To pull off an effective Siphon, the Corp must have at least 4-5 credits when the run is successful. They can play around this by rezzing assets, upgrades and ICE during the run. To protect Zona, you'd also need to have NACH out. This in turn means you cannot steal Agendas without further support. That's a lot of conditions.

This is where CBI Raid shines. Being tag-free, it works with Zona. Slowing down the Corp also means drip economy gets more effective by the turn. They can counter a raid by playing card draws - Jackson Howard, Anonymous Tip. Always trash Jackson. Either way, they will have to spend clicks drawing instead of playing cards. Just be careful of that Snare!

(Democracy and Dogma era)
Zanc 93
Does anyone use Zona? I think it's the worst drip income card in the game. You have to periodically spend a click to collect the credits and you have to be super vigilant to avoid tags. I'd especially never play it vs NBN, and you are quite likely to be playing NBN regularly. — quailman2101 11 Apr 2016
I quite like the idea of forcing a shuffle through things like keyhole after making them return their combo pieces to r+d — gamblingworld 12 Apr 2016