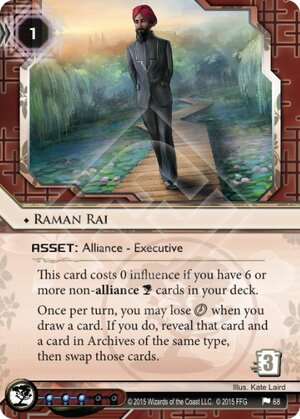 This asset costs 0 influence if you have 6 or more non-alliance jinteki cards in your deck.

Whenever you draw a card, you may lose click. If you do, reveal that card and 1 card in Archives of the same type. Swap those cards. Use this ability only once per turn.

This is definitely one of those cards that makes you go "hmmm". The effect is certainly useful: I'm sure many times per game you would spend a click to swap a card in your hand with a card in your heap, but the question is whether that is worth a deck spot, and whether it is worth building your deck around.

In order for this card to be useful, you need to have sufficient cards of the card type you want to recur. What I mean by that is that if you want to re-use an operation multiple times, your deck needs to have enough operations in order to trigger Raman Rai multiple times. Another reason you would want this card in your deck is when you have very impactful, unique cards that you would like to play over and over again. Some cards that spring to mind are SanSan City Grid, Power Shutdown, Biotic Labor and damage cards such as Neural EMP and Scorched Earth.

Of those cards, I think that one of the most interesting is Power Shutdown. Power Shutdown has a few downsides, a lot of which are shored up by Raman Rai. The biggest drawback is that it doesn't target, meaning that the runner can trash his least important program/hardware that costs X or less. Being able to Power Shutdown multiple times to clear out the chaff is pretty useful, and if you can kill all of their breakers, you may be able to shut the runner out completely. Another downside of Shutdown is that trashing cards from your R&D risks losing you agendas in your archives, and although Raman Rai forces you to swap agenda for agenda, putting extra cards into your archives is pretty synergistic with him.

Other things that interact well with Raman Rai are clickless draw cards such as Palana Agroplex, as they increase the likelyhood that you will be able to recur the card that you want.

Lastly, Raman Rai's status as an Alliance card means that it can easily be found via Mumbad City Hall. The problem is that I expect this to only be played in Jinteki, even with the advantage of being an alliance card, as there aren't many Jinteki cards that are commonly splashed in other factions.

Anyway, this is certainly an interesting card, because it provides repeatable recursion, which not many cards in Netrunner can boast. His biggest problem is his clunkiness -- his ability is pretty unwieldy, and if the runner catches on to what you're planning on doing, 3 is a pretty low trash cost.

(Salsette Island era)
bracketbot 59
Blue Sun might like this one. Go heavy on operations, and recur that Oversight AI again and again. — jdharper 29 Apr 2016
I was thinking this would be great in an IG deck for traps and then museum of history can just recur the card that was swamped into archives anyway — Makehate2me 30 Apr 2016
One of the splashable Jinteki card... Snare. Unforuntatly, three sanares won't trigger alliance effect and adding more Jinteki cards makes you even less felxible. — Personal Snare Iris 21 Sep 2019