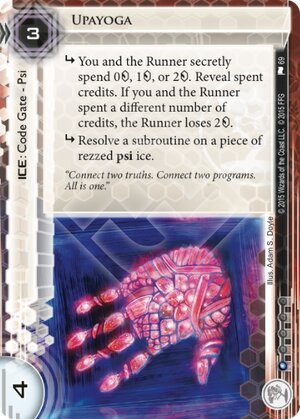 subroutine Resolve a subroutine on a piece of rezzed psi ice.

"Connect two truths. Connect two programs. All is one."
Illustrated by Adam S. Doyle
Decklists with this card

Upayoga's first subroutine presents an interesting game theory problem because the payoff matrix is rather strangely shaped, this is true whether or not Upayoga is being played out of Nisei Division.

(Salsette Island era)
Zakalwe 479
Seems like it's rarely true that both sides value a credit the same, though. Vamp is a good card. Even ignoring that, the mixed strategy is only "optimal" if you also assume the runner knows the corp's betting strategy, which isn't true either unless the corp is an open-source bot or something. — Toper 5 May 2016
As an economist, I love seem equilibrium analysis on psi effects. I think it's worth stressing the assumptions involved in some of the conclusions though. A corp with surplus credits can gain a significantly better equilibrium against a runner who is constrained. Anyway, passes peer review. :) — whirrun 5 May 2016
@Toper: It's the optimal strategy irrespective of whether or not the runner know the corp's betting strategy. In fact, the runner can adopt any strategy involving any [probability] combination of 0, 1 or 2 credits and never get a better expected value than -$1.75 against Nisei Division. Draw up the payoff matrix yourself and test it if you don't believe me. — Zakalwe 6 May 2016
Zakalwe, your math is fine; I'm really just making the obvious point that a corp can do better than a .75 or 1.75 swing if they have any read on the runner. The mixed strategy just guarantees you an average payoff, which is indeed optimal against a perfect opponent who can always predict your betting strategy. But against normal players an average payoff is just, you know, average. — Toper 6 May 2016
As an example, if you think the runner is equally likely to bid 0 or 1, then a mixed strategy is bad; better to just bid 0. — Toper 6 May 2016
I see what you are trying to say now Toper. The whole point of Game Theory is to find the correct best strategy when the opponent is also trying to play the best strategy. Now a runner betting $0/$1 with a 50%/50% probability is not as stupid as repeatly running an Archives full of Shocks until they flatline themselves, but it is certainly a suboptimal pattern of play. I don't think people need help winning against poor play as much as they need help winning against strong play. — Zakalwe 6 May 2016
4

As others have noted, the rez to strength ratio is great and it has 2 subroutines. I don't believe there is any practical way to break this ice for less than 2 credits, with most options costing more (Gordian Blade, a solid breaker, will cost 4). So assume for now they let the subroutines trigger.

What subroutines can this ice trigger then? There are only a few psi ice in the game at this point, so the pool is somewhat limited. Here are the contenders:

Upayoga itself - A decent option. If playing as Nisei Division: The Next Generation, this ice will gain you two credits if you bid 0 each time, with the option to bid 1 (costing you nothing) to tax the runner 2 credits.

Bullfrog - An interesting choice. If you win the psi game, I believe that this would move the Bullfrog to the position of your choice and they'd now be running just past the moved Bullfrog. This would be fun to play around with especially in conjunction with Whirlpool or Labyrinthine Servers.

Clairvoyant Monitor - This is a cool subroutine but the ice itself is not that good at 4 to rez and only strength 3. You could certainly make some fun plays with this.

Mamba - Doing a net damage is never a bad thin;, or try and save up a few counters on Mamba for some mid run fun. Combine with House of Knives for maximum effect.

Snowflake - Not my favorite by any means. There is a reason this ice is not played. Even though the subroutine is harder to break if triggered from this ice, it just isn't very good.

Chetana - A soon to be released card that could be a great target for Upayoga.

and Mother Goddess - This may be one of the best interactions as it straight up ends the run, no chance for the sub to "miss".

With some of these cards rezzed the runner will probably be forced to just break the ice, which isn't a bad option for you either.

In conclusion, this card has some potential but will probably not be played outside Nisei. It is the first card to make me want to make a Nisei deck though.

EDIT: I forgot to mention upgraded Yog.0; Dino, Net Ready Eyes, or Personal Touch. This will obviously ruin your day if you are counting on this ice.

"Resolve a subroutine on a piece of rezzed psi ice"?

Alright, I think I'll pick this one here...it says "Resolve a subroutine on a piece of rezzed psi ice"

Alas, there is not yet a Corp ability that triggers whenever you resolve a subroutine. One day...

This is one of the most interesting psi-ices we've seen yet. Let's talk about why.

First off, basic numbers. 3 for a 4-strength ice, with 2 subroutines... where have we seen that before? Oh right. Eli 1.0. The gold standard for strength:cost in ice. So that's cool. It's not quite as annoying as Eli, (it can't end the run without help) but it's up there.

And then there's that first subroutine. The math on it is crazy. Since the runner loses 2 even if they lose the psi game, they're basically never going to bid 2. So the runner is going to bid either 1 or 2, meaning the corp can always force them to lose at least 2$c, just by bidding 2 themselves. (Also worth noting: Unlike, say, Tollbooth, this one just causes the runner to lose 2. It doesn't say "... if able". Meaning that if the runner only has 1, they still lose it.)

Of course, in Nisei Division: The Next Generation, the corp gets 1 refund every time.

But then there is that second subroutine. This is where things get really interesting, because unlike most of the other "fire off some other ice's subroutine" ice, this one can target itself.. So even if you have no other psi ice rezzed, this thing is still a hugely annoying double-psi-game, which will usually cost the runner 2-4. And again, if corp is playing Nisei, (which is where I expect to see this card the most), then they gain 2 too.

All in all, this card is pretty cool. Will this be the one that pushes Nisei Division over into being worthwhile? Not sure, but it is definitely a big step in the right direction.

The most interesting thing about this ice is its interaction with Nisei Division. Because this triggers Nisei Division twice if the runner doesn't breaker it, you can gain a significant credit advantage over the runner. And yes, the second subroutine can copy the first subroutine.

Another notable thing about this card are the stats. A 4 strength code gate with 2 subroutines and a 3 rez cost is about as good a rate as you are going to get, the trick is to make the subroutines useful enough that the runner wants to break them. In Nisei Division, I think that the subroutines are valuable enough that the runner is going to want to break it, but outside of that ID, I'm not sure if the runner is incentivized enough. The rez cost of 3 is a little tricky though, as this ice will generally cost credits in order for it to be useful.

Like most other psi game cards, this ice is absolutely useless if you have 0 credits (outside of Nisei Division), as the runner can bid 0 twice to march right through it. Also, unless you have other rezzed Psi ice, if the Runner is at 0 credits, they can just pay 0 twice and lose 4 of their non-existent credits. And unlike in real life, Runners can't go into debt.

Overall, I think there's some mutual attraction between this card and Nisei Division. Division is definitely in need of cards that can trigger psi games multiple times a turn, and this card is definitely improved by gaining a credit every time the subroutines fire. Outside of that ID, even with great counting stats, I don't think this is good enough.

(Salsette Island era)
bracketbot 59
I think this is cool that you can create yet another Infinite Loop with Jinteki ICE, a little difficult, but a Whirlpool, Errand Boy, Upayoga, and Mind Game! Should be equal to a flatline or something, but the guys at FFG fail to still be cool. — rezwits 25 Mar 2017