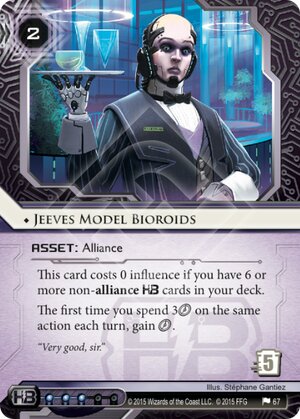 We finally have clarity about how and when this card triggers. It triggers in the following two scenarios:

The result is a lot of fast advance shenanigans, but most of these work best in HB. Some possible scoring scenarios with Jeeves rezzed are as follows:

If you can include the influence for SanSan City Grid, you can score 4- or 5- cost agendas out of hand with these combos, and they're pretty moderately priced.

One issue is that you'll run out of Shipments from SanSan eventually. HB is the corp best suited to solve this problem, however. Clone Suffrage Movement lets you snatch back one SanSan per turn for each copy rezzed. Archived Memories and Reclamation Order allow you to return them back to your hand at your leisure. If you're playing SanSans or Clone Suffrage, or if the runner is going hard after your Jeeves, you can include Team Sponsorship to make these trashes hurt even more.

This seems like a pretty shocking new way to fast advance, and joins Political Dealings and Mumbad Construction Co. as non-yellow FA tools in the Mumbad cycle.