Whenever the Runner makes a successful run, you may place 1 advancement token on a card that can be advanced. 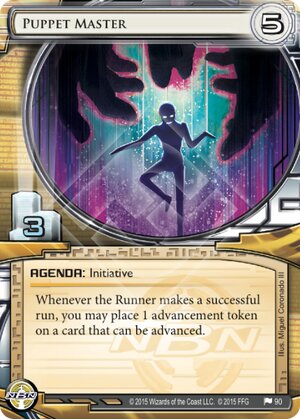 So let's get this out of the way first. Yes, it is a 5/3 agenda in the faction that is lousy with powerful 3/2s, 4/2s, and 2/1s. Yes, the effect would be much, much better out of Weyland. Yes, it's hard to justify playing any 5/3 that isn't Global Food Initiative or The Future Perfect because it doesn't protect itself.

With all that taken into account, there isn't really a way to play Puppet Master at the most cut-throat, competitive level. If that's all you care about, go back to your FastroBiotics and Butchershops or whatever you people are playing.

Okay, now time to talk about the jank potential of this card.

First thing, this is EVERY run. Every. Run. Not the first run each turn, every run. On an effect that cannot be turned off or disabled. If you score this early, this could result in DOZENS of advancements over the course of the game.

Second thing, you're going to be placing advancements on the runner's turn, and only after successful runs. This means that it won't help you score faster--if they run a server with an agenda in it and succeed, there's no point in advancing it, and if they run a different server then the advancement is just saving you a click and a credit next turn.

No, this card is more useful in doing one of two things. Advancing assets like crazy, or advancing ice like crazy.

The asset play is pretty simple. You get yourself a Project Junebug or a Ghost Branch or something and pile counters on it. Then, when you're good and ready, Back Channels it for upwards of 30 credits. This also pairs nicely with Mushin No Shin, which could help you score the Puppet Master in the first place.

The ice play is also pretty simple. You pack yourself 3x Ice Wall, 3x Fire Wall, and at least a couple Commercialization, and watch as your ice tower grows to insane heights. Maybe add in some Matrix Analyzers and Builders if you want to see how many advancements you can get on a single piece of ice. You might be tempted to go with space ice like Wormhole but remember that anything after the third advancement is so much extra cardboard.

Either way, Puppet Master really needs to be the first agenda you score to be effective. Either that, or you can use Media Blitz to make sure it's up. Oh, by the way--Puppet Master stacks with itself. Generally by the time you score the second one you've already won, of course, but if you have a Puppet Master scored and a Blitz on another you've got a pretty strong deterrent. Maybe this is the framework for a Sol advanceable glacier build?

Have fun with this card, but don't take it too seriously. If it was meant to be serious, they'd have printed it green.

(Fear the Masses era)
tiedyedvortex 4617
The other way to get its effect if it is stolen is Exchange of Information + Breaking News. But honestly, it should have been green - then we can Punitive Counterstrike it. — PureFlight 10 Jul 2016
You can use this for some never-advance shenanigans, especially out of haarpsichord. Install a 4/2 facedown, and if the runner uses all their money or their last click to run something else, put an advance on it and score out. If you're haarpsichord, install 2 agendas at once. If they steal one, advance the other while it's untouchable. Throw in a GRNDL refinery to sow doubt about whether they need to run your remote. — OrionJA 1 May 2018