The first time you make a successful run on HQ each turn, force the Corp to trash the top card of R&D.

"They don't want to listen, so we'll just have to crank up the volume."
Anarch • Kate Laird • Fear the Masses 98
All sets:
Links: Decklists | ANCUR 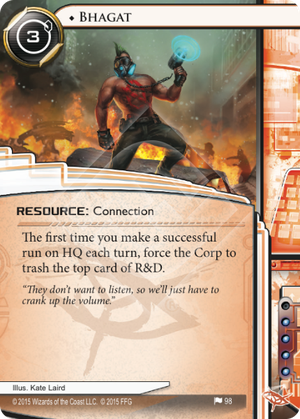 At first, this seems like a pretty lackluster card. You only trash one card, once a turn, you have to make a run on HQ, and the card itself is unique. Not super impressive.

But here's the thing. Assuming that, at some point, you'll be checking Archives to see what you milled, that means that every mill is essentially a free access. That means that Bhagat becomes a sort-of R&D interface on HQ: if you make a successful HQ run, you get an "access" on R&D.

Oh, but it gets better. Milling a card isn't just an access. If you mill an agenda, then yeah you're essentially just banking the steal for a later time. But if the card isn't an agenda, and it gets trashed, that means that the corp now has one less card as a buffer between them and their next agenda. That's one less operation to make them money, or one less piece of ice covering their servers, or one less asset you have to pay to trash.

Bhagat is enough of a threat that a corp absolutely needs to stop you from getting into HQ, particularly if paired with Fear the Masses. But if you combine Bhagat with, say, Keyhole, then suddenly you have some substantial pressure on both HQ and R&D. Add in a little bit of Noise action or Data Leak Reversal and you will have enough avenues to mill that you can churn through cards pretty quickly.

And you know what works nicely with this setup? Eater. Get an Eater, a Keyhole, a Bhagat, and some Fear the Masses in hand and the corp will be fighting to shore up their centrals. This is good. This means their scoring remote should be pretty easy to bust your way into. Especially if you've managed to mill away their best ice.

Bhagat is a deceptively nasty card. At four influence, there's really no reason to play it out of faction, but if your Anarch deck is short on ways to threaten HQ a one- or two-of include could definitely pay off.