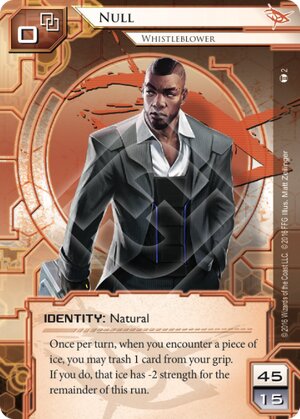 Once per turn, when you encounter a piece of ice, you may trash 1 card from your grip. If you do, that ice has -2 strength for the remainder of this run.

I like this ID. It has a lot of built-in combo potential.

Parasites and Core Anarch suite come to mind first, yes, along with support of some Datasuckers should prove viable enough, even against stronger, meaner ICE. But this obviously doesn't cut it - that's what you see at the first glance. Let's look again.

All the cards you trash, as you are Anarch, remain easily accessible. Yes, events too, so with proper deck construction you rarely would hesitate to use your talents!

Realize this: if you happen to discard a card to your core ID ability, you can then immediately use Clone Chips to effectively install a program from your grip at instant speed. It is a thing Shapers excel at, but then, Shapers don't have in-faction Parasites, yes?

Wanna make money? Consider extending your circle of influence at Exclusive Parties - after you feed several of them to your ID, of course.

What else is there to say? With Null, you don't have to worry about having to include multiple copies of crucial cards just for the sake of consistency. With such an ability, no card is really useless, so additional copies of, say, a console, won't be much of a hassle. And this, unto itself, is an awesome trait.

I expect Null to see a lot of play very soon. He involves a lot of making decisions on the spot - would I rather use this card or trash it to weaken some ICE? - but if you play your cards right (heh), the result is certainly satisfying. Sure, he won't give us Whizzard back - there's a lot more thought involved when going as Null, which also makes him an ID much more elegant to run - but his sole destructive power is comparable, even if not as direct as Whizz's.

(Blood Money era)
H0tl1ne 414
If the card Null discards is Paperclip can it be installed right there and then? — paulxthompson 7 Oct 2016
I think yes. You choose the order in which the triggers happen, so you fire Null first, then the Paperclip and you're good to go. — H0tl1ne 19 Oct 2016
that is incorrect: because they have the exact same trigger, by the time you use Null's ability to discard Paperclip, it's too late for Paperclip to trigger from the same encounter. it has to already be in the heap when you encounter the piece of ICE — dr00 29 Oct 2016
dr00 seems to be right, which is additionally backed by a certain discussion on Reddit. — H0tl1ne 1 Nov 2016
This is at odds with the ruling in the FAQ about Medical Research Grant and Team Sponsorship. A MRG scored can trigger Team Sponsorship, which puts a MRG on the table from HQ. That new MRG can then score based on the first MRG's ability. The second one does not have to be already on the table to take advantage of the trigger. — FightingWalloon 22 Jan 2017
FightingWalloon that is a different timing... Paperclip is installed when approaching an ICE, while Null ability is used during encounter (after approach) hence timing to use Clone Chip or Paperclip has passed... — atuk84 11 Oct 2017
5

Turn those useless cards in your grip into two Datasucker counters! Help your Parasites do their job faster! Bring that Assassin down to Mimic range, or turn that Tollbooth into a sightly more expensive Pop-up Window for your Yog.0! Embrace your inner Apex and Prey on weak ice!

(23 Seconds era)
ClubbingSealCub 24
Doesn't Null kill Tollbooth before its trigger happens? So the runner is no longer encountering the ice and so not lose the 3 credits. — kulkija 9 Aug 2016
Sisn't read your comment to the end for some reason and didn't notice you were talking about Yog.0 — kulkija 11 Aug 2016