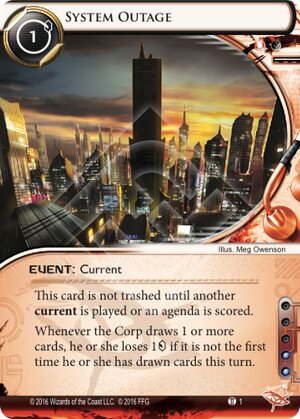 This event is not trashed until another current is played or an agenda is scored.

Whenever the Corp draws 1 or more cards, if it is not the first time they have drawn cards this turn, they lose 1credit.

Illustrated by Meg Owenson
Decklists with this card

You look at this card and you're like, "That's a really cool effect but, what archetype am I going to put it in?" It turns out that it actually works in the most anarch decks, since most anarch decks are focused in trashing, something of the corp. Anarch decks (at least how I understand it) are usually focused on draining the corp of something. Ice (cutlery), assets Whizzard: Master Gamer, operations Edward Kim: Humanity's Hammer, cards in general Wanton Destruction Noise: Hacker Extraordinaire. And when you trash something of the corp's they need to find that piece again.

Lets say that the corp just scored a 4/2 that isn't an economy agenda (like NAPD Contract) or a 5/3 Global Food Initiative. Usually at this point in the game the tempo flips over to the runner (because the corp just spent 5 and 5 to score something behind either gear check ice or some taxing ice like Turing.

At that moment you have your window to strike at their tempo with System Outage.

At this point you probably have whatever you need to start applying pressure. This is when you start drawing your cutlery ice and trashing all their ice so they have to go digging (and drawing cards) to just keep you out. Or when you start trashing all of their server upgrades like Ash 2X3ZB9CY or Caprice Nisei or Breaker Bay Grid from their R&D so they can't do the upgrade combo and have to dig for the second one. Or when you start trashing operations out of HQ as Edward Kim: Humanity's Hammer and they have to try to draw their combo again.

And because the corp is losing every time they draw extra to try to recover whatever your anarch is making them lose due to System Outage. That window of not having whatever their looking for, whether it being ice, or assets, or operations. Increases because they don't have the money to play those things that they're looking for.

(23 Seconds era)
debraken21 47
Maybe this card will finally make Ixodidae viable. — tiedyedvortex 24 Jul 2016
Jank challenge accepted. — LynxMegaCorp 25 Jul 2016
System Outage + Ixodidae + CBI Raid. That could take an early Corp 3-4 turn just to recover. — Akanthinos 27 Jul 2016
Is no one gonna mention Hemorrhage? Okay. I'll go back to the Tenmorrhage fanboy corner. — Neon Cherry 27 Jul 2016
This suffers from Netrunner's lack of tight rules templating, so we will have to wait for an official FAQ to know for sure, but based on the wording it currently has, I would assume that this triggers when ANYTHING causes the corp to draw a card (not just voluntary actions like click to draw or jackson). This means that it creates a nice 1 credit drain when you fire off a Fisk Investment Seminar or Fisk's ID ability. If this is wrong, then that wording needs to read "clicks to draw a card or draws a card through a card ability." Still, this could be fun in Fisk. — syntaxbad 29 Jul 2016
Oops, never mind. "This turn" means Fisk doesn't really benefit, since the forced draws are on the Runner turn and the corp won't have drawn yet. Boo. — syntaxbad 29 Jul 2016
@syntaxbad, if you can make the corp draw twice in a turn, Fisk Investment then Fisk's ID ability for example, this card should trigger. — lunchmoney 1 Aug 2016
When [Equivocation](/en/card/11084) drops, I think card will card will have a place. — staglore 8 Sep 2016
It's not that difficult to make the corp draw twice on the runner's turn. There's Fisk Investment Seminar, Polyhistor, and Equivocation. Maybe more that I'm forgetting. Sometimes the corp also wants to draw on the runner's turn. There's Estelle Moon, various ice with card draws (generally optional, but still worth punishing), and weirder stuff like using ice or advanced assembly lines to install things while triggering turtlebacks or NEH. — OrionJA 1 May 2018