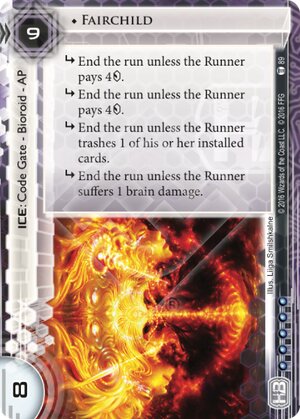 subroutine End the run unless the Runner pays 4credit.

subroutine End the run unless the Runner pays 4credit.

subroutine End the run unless the Runner trashes 1 of his or her installed cards.

subroutine End the run unless the Runner suffers 1 brain damage.

As a player who regularly tries to include Wotan into decks, I really think this ICE is a beast.

Let's compare Wotan and Fairchild directly.
Both are unique, expensive, not punishing against unprepared facechecks, but taxing to break. And they both can be run through without a breaker, by simply paying the price tag on the conditional ETRs. So let's look at these price tags:

Wotans first sub demands , while Fairchild wants 4. Depending on the runner's economy, these taxes might be worth roughly the same in a "I prepare for a full turn to get through this once"-scenario. Though, personally, I'd say Wotan has a slight advantage here as clicks are more limited.

The second sub is easy. Both tax creds, but Fairchild taxes more.

On the thrid sub, Wotan wins. The runner has to trash one of his own cards of his own choice, but Wotan restricts this to programs, which can make a difference against some runners. Notice that both subs can be meaningless if the runner has spare cards installed that he doesn't need anymore. Like a program that has used up it's power counters.

The last sub is identical and let's the runner pass for a brain damage. This is prohibitive to do often, but usually no problem for the runner in a "just this final run!" scenario.

So, all in all, if the runner is trying to run through any of these two without breakers they're largely the same. And this is huge. For 9 Fairchild does basically what Wotan does for 14.
Yes, it has 2 strength less. But that's totally fine for 5 less.
Yes, in the current meta runners are better prepared for big Code Gates than for big Barriers. But again, for 5 less rez cost it's totally fine if this thing taxes a few creds less to break.

Because those 5 less rez cost matter. A lot. Fairchild is SO much easier to hard rez when needed.
Yes, you can use all the jank you used to rez Wotan on Fairchild and get almost as much taxing power out of it, but you don't have to rely on it, because paying 9 is a lot easier to pull off (and to recover from) than spending 14.

I have used both Wotan and Heimdall 2.0 a lot in certain decks and Fairchild is almost an auto-include in those.
I would go as far and say I'd still use it in some of those decks if it had 12 rez cost.

But it hasn't. And that allows it to be played in decks where you simply can't use 10+ cred ICE. Like, you know, normal decks! :D

Fairchild is a great binary tax. Either the runner bounces and can't get in or he pays a lot. Enough to make this thing highly cost efficient for any glacier.

P.S.: This is not an upgrade of Fairchild 3.0. It fills a different role altogether. And that's okay.

I cannot decide if this is strictly better than Fairchild 3.0. It's got some excellent taxing subs, and has the advantage of not having the standard bioroid "click to break" condition and quite high strength. However, it's unique, it lacks a hard ETR sub and so is porous enough to fall to the hail-mary matchpoint run, and is expensive to rez.

Looking at it, I think it combos well as a possible ABT target, backed by Ravana 1.0.

Definitely would not rely on it to win you the game though.

(Martial Law era)
ComradeMik 4
I'd compare it to Woton, not Fairchild 3.0. — quailman2101 12 Dec 2016
The other main disadvantage this has is that you can bounce off it without penalty if you hit it unprepared. No such luck with Fairchild 3.0, where unless you're running first click or have the appropriate cash and breakers it's going to hurt pretty bad. — LordRandomness 12 Dec 2016
Total ignoramus move here, but how do we know that a card is unique? I've been wondering this since Susanooo-No-Mikoto — StarlightCrusade 15 Dec 2016
"Some cards have a unique symbol (◆) in front of their title."-Core Rulebook. pg. 11 — LearnedFool 15 Dec 2016
Am i the only one that has noticed this can be used with Bioroid Efficiency Research, without the weakness to being clicked through? — overlord midas 26 Dec 2016