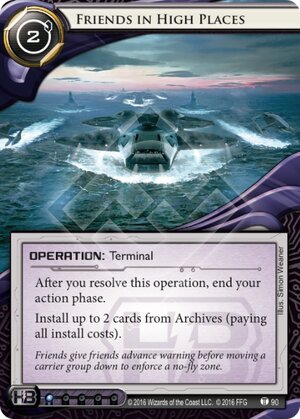 Install up to 2 cards from Archives (paying all install costs).

Friends give friends advance warning before moving a carrier group down to enforce a no-fly zone.
Illustrated by Simon Weaner
Decklists with this card

Scenario 1: You're playing v. EtF. They've just scored their second 3/2 from hand with a San San behind a Tollbooth. And it's only their sixth turn. You've finally got your decoder up and running. This is going to suck you think, but you bite the bullet and make the run. 12 credits gone, but you got rid of that stupid San San.

EtF responds by installing another ICE in front of Tollbooth, clicking for a credit and then playing Friends. San San is reinstalled and an Adonis Campaign for good measure.

Scenario 2: This time Gagarin is your nemesis. You decide to check the new remote they just created. And it's Jeeves. You think, "I really can't afford to trash it, it'll set me way back. But if I don't, they are going to get some easy points. And I have already spent the credit to access it." So you trash it.

Gagarin calmly does much the same as EtF. Jeeves is reinstalled and a Commercial Bankers Group for the heck of it.

Would these scenarios bother you? More likely they do bother you now. This card is finding place in countless decks. Someone, for some reason, thought it would be okay to put only one pip on this card. A card that is incredibly versatile and powerful. Cards in archives are supposed to be hard to retrieve. Sure there are ways to get them back. Shuffle 'em back in with Jackson or Preemptive Action. Or spend two clicks to retrieve and then play a card with Archived Memories (a card that costs two influence).

Now onto counters to it. The following can be effective. Archives Interface, Salsette Slums, Imp, Edward Kim: Humanity's Hammer, and Wanton Destruction. All orange cards. Good cards, but not easy to slot into just any deck.

EDIT: Forgive me if I'm beating a dead horse, but I am getting more and more annoyed with this card. In addition to the above strategy of reinstalling powerful, high trash cost assets and upgrades, I am seeing another all too common scenario. On Jinteki.net I am seeing a lot of Asset Spam 2.0 decks. I will say that the asset spam decks of old, while sometimes annoying to play against, were perfectly legitimate. The corp would try to overwhelm the runner's economy and time with plenty of must-trash assets while sneaking out a point or two when they could. FiHP takes this to a whole new level. I'm seeing Gagarin and RP decks with FiHP, Clone Sufferage Movement, and a combination of the following: Museum of History, Encryption Protocol, Bio-ethics, Hostile Infrastructure, Jackson Howard, Preemptive Action, Mumba Temple, Tech Startup, Mumbad City Hall, Mumbad Construction Co. and more. Between clicking for money and making runs to trash, there isn't even time to draw cards, much less make runs with intentions to steal an agenda. I'm going to go ahead and tell anyone who is reading this, that if you are doing this, please STOP! It is not a legitimate strategy. Will you win? Probably a lot, Against me, you'll win by default as I will end up conceding after 20 turns of horrible monotony. But deep down, you must realize you are taking advantage of an obvious mistake that FFG made. It is similar to people still running the Au Revoir, Turning Wheel, Snitch combo. Or the DDoS, False Echo, Hyperdriver combo. You know it is broken, so stop doing it.

And last thing. This is one of those cards that demand that every runner, for the foreseeable future, build their deck with counters to it (much as corps must build around Sifr at the moment). Cards like that may be fine in and of themselves (this one isn't) but they should all cost a lot in influence so that at least you don't have to run into them every single game.

(Quorum era)
quailman2101 272
Couldn't agree more. — H0tl1ne 12 Jan 2017
In addition to your valid points (I also agree), I am especially p****d that this card is only **ONE INFLUENCE** (damn, come on FFG) in a faction that can recur it with Clone Suffrage Movement, that the last too sets have added Preemptive Action and Museum of History. It would have been balanced with *'remove Friends in High Places from the game instead of trashing it'* — Him 12 Jan 2017
Why wasn't this put on the MWL? — quailman2101 6 May 2017
5

Disclaimer. It seems like Superfriends did find a friend in the person of Lukas. Now we have back all these bullshit prison decks . They even moke us with the title (also illuminati confirmed). I'm pretty disappointed with this card existence.

Ok, now the review. For the cost of 2 credits and click you gain at least 4 full clicks of value. 2 extra cards and 2 installs. And overtop of that you gain recursion for keycards that were trashed or discard earlier. That's amazing value for a single card and in my personal chart of broken economy cards it gets very close to temujin.

The application for card is very universal. You can recure your economy, return JH when you need him, tax clicks for runner recurring couple of politicals (with clone surfage this can be really stupid) or tax real credits (and clicks) returning couple high cost assets or upgrades (like san-san and jeeves), play click compression games installing 5 remotes per turn with jeeves and this one, return caprice, ash and batty into your super remote if you're glacier, reinstall parasited/eaten ice or return trashed agenda with dlr/noise.

With only 1 influence it will find slots in most of current deck (CtM, HB), it will recure old nightmares aka IG and Gagarin, it will summon new decks of this archetype.

There are couple limitations for this card of course. It is terminal, so at least it will not boost shutdown/diagnostics combo, to use it you need assets in your discard, so if runner ignores your board Friends will stack your hand (but you should be fine with that). And... Ok that's all I can think about. The rest of this card is too good for netrunner I love.

(Martial Law era)
gozik 407
I agree, this card should not exist. — quailman2101 16 Dec 2016
Welp, time to slot Archives Interface again... — stringtheory 17 Dec 2016
I guess it's also intended as one of the post Jackson cards. I think when reviewing this card this has to be kept in mind, because reshuffling your agendas will be harder. — bakunin75 21 Dec 2016
Terminals doesn't work with Jeeves. — Syntax 28 Dec 2016
Install 3 assets from hand, play friends into couple of SAU. 5 new remotes to be checked/trashed by runner. — gozik 30 Dec 2016
Until they make the following card, Event: 0 Trash all cards in all servers, I want this card to be officially banned. — quailman2101 12 Jan 2017
I honestly think A good solution to this would be a criminal console/ID that states "The first time you make a succesfull run on HQ, you may access up to 2 cards installed in a server without any ice protecting it." Or something like that, multi access remotes. — HyenaMars 11 Mar 2017