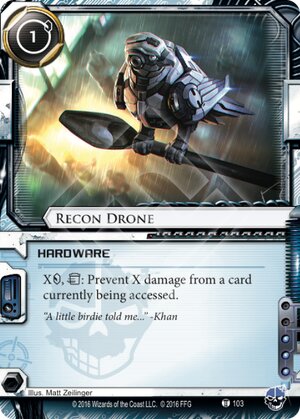 Xcredit,trash: Prevent X damage from a card currently being accessed.

"A little birdie told me..." -Khan
Illustrated by Matt Zeilinger
Decklists with this card

Solid anti-trap tech. Still doesn't block non-damage traps like Ghost Branch, Shattered Remains or Plan B, but is fantastic protection from Snare!, Fetal AI, Prisec, and so on.

In my mind, it has three really important features:

This card works especially well with Armand "Geist" Walker: Tech Lord, since he gets the extra card-draw from using this. (Making him even harder to flatline.) Not sure if it's worth running over Sports Hopper, but probably at least worth considering. (Sometimes preventing damage is better than drawing enough to absorb it, especially for criminals, who traditionally lack ways to get things back after they lose them.)