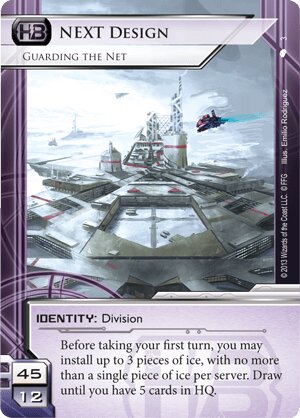 NEXT Design: Guarding the Net

Before taking your first turn, you may install up to 3 pieces of ice, with no more than a single piece of ice per server. Draw until you have 5 cards in HQ.

This is my favorite corp idenity, and I can't wait for the next NEXT ICE to come out (the sentry). Right now, sadly, it's a pretty weak corporation to play. I've seen versions with Eliza's Toybox that do well when all the stars align...but overall, it's nothing when compared to Blue Sun or Jinteki: RP.

(All That Remains era)
esutter479 319
The Mother Goddess thing deserves an extra mention. It's disgustingly easy to park an Agenda or high value Asset behind it turn 1 — LordRandomness 6 Jun 2016