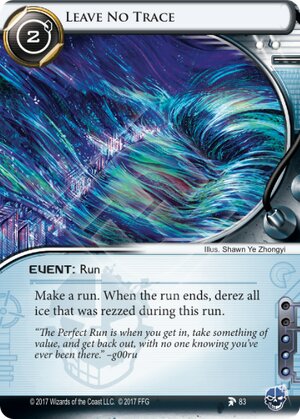 Make a run. When the run ends, derez all ice that was rezzed during this run.

"The Perfect Run is when you get in, take something of value, and get back out, with no one knowing you've ever been there." -g00ru
Illustrated by Shawn Ye Zhongyi
Decklists with this card

What a nice stack of ice you have. Would be a shame if some of it would get ... derezzed.

Leave No Trace (LNT) puts the corp in the unenviable position of rezzing ice to keep you out and losing the investment in rez cost or not rez ice and have you walk in cheaply.

The main downside of LNT (beside not abbreviating to TNT) is that being a run event you can't use it with a run event like Legwork. And when running on an agenda you probably won't keep the corp from rezzing ice to stop you. And if you make a run that's not threatening enough the corp simply won't rez any ice.

All this makes LNT a bit tricky to play. I think the ideal time to play it is click 1 on an agenda run, have the corp rez ice to stop you, eventually bounce if you can't get through the ice and then try again in the hope that the corp won't have enough credits to rez again. Even if the corp manages to stop you you'll have drained a good chunk of their credit stash which is enormously helpful when you sing the old criminal song "I'm rich, you're poor. I run, you hide. I win, you lose."

To get the same effect without an agenda on the board is more tricky. You want to make a threatening run but you can't use any run event and that precludes the aforementioned Legwork, Account Siphon, High-Stakes Job (imagine combining that with LNT), etc.

The obvious tool is multi-access. However HQ Interface will rotate soon, as will Nerve Agent. The Gauntlet is good but it's anti-synergic with LNT (LNT needs unrezzed ice, The Gauntlet needs rezzed ice). The Turning Wheel takes long to charge up high enough to be threatening.

I fail to see a use of LNT outside of an agenda run to force the corp to lose money or let you get an agenda cheaply. And given that there are other options for agenda defense it seems hard to justify including it in your deck.

Or am I missing something?

(Free Mars era)
Silv 340
I like your write up. Some other synergies to consider might be a Temujin aimed at HQ, with a Gauntlet installed. If you LNT HQ, your getting Temujin creds, and an access (let alone if you had an Aeneas Informant as an extra kick). Essentially the corp here is damned if they do, damned if they don't. — Scoogsy 10 Aug 2017