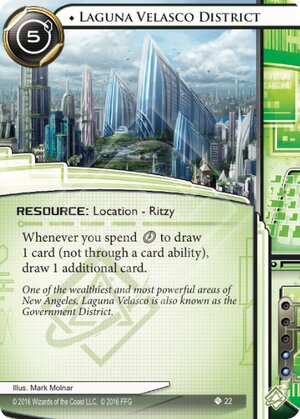 Whenever you take the basic action to draw cards, increase the number of cards you draw by 1.

One of the wealthiest and most powerful areas of New Angeles, Laguna Velasco is also known as the Government District.
Illustrated by Mark Molnar
Decklists with this card

A drawing dual to Magnum Opus (MOpus) and Professional Contacts (ProCo). Same credit cost as those two, same influence cost. The big difference is that Magnus Opus takes 2 MU while the other two are resources and Laguna Velasco District (LVD) is unique unlike both MOpus and ProCo. However MOpus and ProCo have paid abilities and LVD triggers off a normal click action so in effect while you could install multiple MOpus and ProCo you normally would treat them as unique.

In terms of effect the card is simply: draw 2 for the price of one. It simply makes clicking for credit pretty efficient. Consider that Diesel lets you draw 3 cards for but since you've already had to draw and discard Diesel itself the net gain is 2 cards, the same as LVD.

Note that LVD has a particular phrasing which means that unlike MOpus and ProCo you draw with a normal action, not a paid ability. I couldn't find any corp cards that trigger off the runner drawing a card not through an ability but it wouldn't surprise me if a draw based dual to CPC Generator appears in the future and this detail would matter then.

So when should you use LVD? Obviously it's not cheap at 5 so if your deck doesn't generate much credits you're better off with alternatives like Diesel. It's also a resource which makes it vulnerable to tagging and both its cost and effect make it a prime target for a snipe by the corp. Tags can hurt in many ways though so most decks will already have some kind of counter. Still, if you're going to float tags LVD is obviously not for you.

In most shaper decks however LVD shines. It's a very measured way of drawing cards, you only draw 2 every time you use it so you're unlikely to be stuck with an overflowing hand full of cards that you really don't want to discard. At the same time the efficiency gain over the course of a game is significant and lets you bring the pieces of your ice piercing machine online much sooner. What? You don't need to install half your deck before winning? What are you doing in shaper then? :)

Overall LVD is a powerful card that brings symmetry to the shaper line-up of costly efficiently boosters. I expect it will find a spot in many shaper decks and even elsewhere (*cough* Sunny *cough*).

(Terminal Directive Cards era)
Silv 345
Just fyi, [Symmetrical Visage](https://netrunnerdb.com/en/card/08009) triggers when the runner draws a card not through a card ability. — Eolas 28 Apr 2017
The Corp card that punishes this card, but not Mopus/ProCo, is Gorman Drip V1. — Severedhead 3 May 2017
I think this and symmetrical visage would be great. Basically get a build script every turn. — quailman2101 7 May 2017
@Eolas True, but drawing a card not through a card ability is what triggers LVD and consequently Symmetrical Visage. — Chezni 23 May 2017
It should be noted that because LVD is NOT a paid ability, you can't "turn off" LVD. While this isn't very significant, it might lead to sub-optimal decisions in situations like last click, 4/5 cards in grip and looking to draw. — BlackCherries 28 Mar 2018