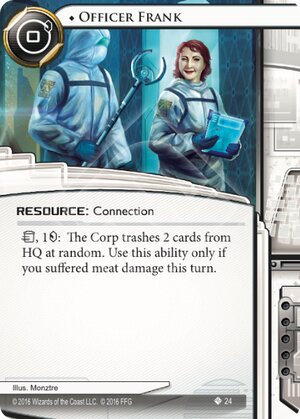 trash, 1credit: The Corp trashes 2 cards from HQ at random. Use this ability only if you suffered meat damage this turn.

Illustrated by Monztre
Decklists with this card

Officer Frank has two uses: as a deterrent against meat damage and as a way of creating HQ accesses without actually needing to get into HQ.

As a deterrent against meat damage it frankly (pardon the pun) is not that great. The thing with meat damage is that it tends to come into large packages and with the intent to kill. From the corp side meat damage is much harder to land than net damage due to most cards that deal it requiring tags to function. This leads to corps either not bothering with meat damage or building a deck around it. From the perspective of Officer Frank that means he's either useless (no meat to trigger off) or useless (trashing cards doesn't help when you're dead). Sure, there are cards that deal small amounts of meat damage, but they're not very commonly played.

The runner can create their own painful bruising luck though. There are a few cards that can deal meat damage at the whim of the runner:

Of these Mad Dash is the most interesting. Officer Frank acts as a consolation price in case you didn't find an agenda, increasing your chances of finding one in archives. And if you happen to not trigger the good officer you're not going to be too sorry with all the agenda points you've gained. Plus the officer will still around for another go.

Overall I think the power level of Officer Frank isn't terribly high, but the combo with Mad Dash is certainly good enough for him to see some play in decks that include Mad Dash.

(Terminal Directive Cards era)
Silv 345
Though I agree that Officer Frank isn't useful against BOOM! as it kills you before you can trigger her, but she may well be useful as a last hope if the Corp is trying to kill you with the classic SEA-Scorch-Scorch, as she can be used before the second Scorch, hopefully trashing it before they can play it. — Quarg 4 May 2017