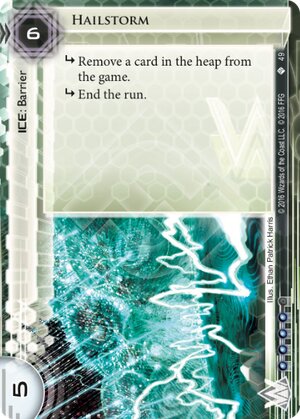 subroutine Remove a card in the heap from the game.

Aside from Hailstorm there are currently three barriers with strength 5:

A one credit difference with strength is for a barrier at strength 5 or higher not bad, as long as it buys you something. Removing a card in the heap once (subs rarely fire more than once) is, in my opinion, worth 1 credit. If the runner chooses to break the first sub that's also good, as long as the runner needs to pay extra. Unfortunately Paperclip tends to throw a wrench into that equation. On the other hand Hailstorm can snipe Paperclip if it's in the heap and the runner doesn't have the money to install it.

Given the popularity of Paperclip Hailstorm should be seen as somewhat decent ice, it's 4 to break with Paperclip, 5 with Corroder. But when facing Paperclip Fire Wall is just as taxing but slightly cheaper.

Hailstorm may have some value when facing a runner who's foolish enough to let the first sub fire with something useful in the heap. But betting on your opponent being a worse player than you is never a good strategy.