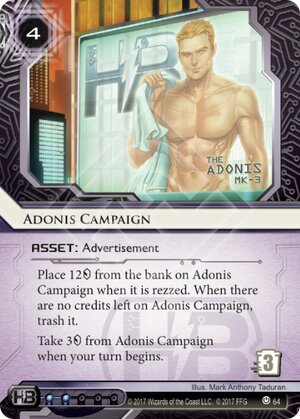 Take 3credit from Adonis Campaign when your turn begins.

Illustrated by Mark Anthony Taduran
Decklists with this card

"Hellloo ladies. Look at your plans, now back to me, now back at your plans, now back to meee. Sadly, only HB has me. But if you stop spending all your influence on over-expensive ICE and rent some hot Bioroids you can have a splash with me. Look down, back up, how are you? You're flat broke, tied at six points, with no man to advance your plans with. One more time, now with me. I've got it. Here's 3 credits to do that thing you love. Click again, the credits are now advancement tokens! Anything is possible when your plan can make three money a turn and not have to click for credits. Just protect me, of course."

Adonis Campaign is one of the more common drip economies that require influence. It certainly has seen its play, holding quite a bit of money on it. It also tends to be rather safe. If the runner trashes it before it is rezed, they are out 3 and the corp is just out a click of the install. If they trash after its rezzed and fired once, its only a credit lost. Trash it after it has fired more than once and it is almost not worth it for the runner. It must be said that the only time to rez an Adonis Campaign is during the paid ability window at the end of the runner's turn. This way the runner doesn't have a chance to trash it, and the corp gets the first income drip right away. Rezing it any time before that just gives the runner a chance to trash it without the corp collecting any money.

The existence of Eve Campaign means it can often be overshadowed. Eve has longer staying power and a higher trash cost, even if it does provide less per turn than Adonis. Combined however, they make a potent drip economy, especially with the likes of PAD Campaign. Adonis lower rez cost is often what gets it in the door over Eve, combined with the greater per turn gain.

That does not mean Adonis is useless however. It is good, reliable money, and even if the runner is just trashing it as soon as they can, then it is causing them to spend money on actions that are not stealing agendas or preparing to steal agendas. It continues to see use, and will continue to be a solid useful bit of drip economy.

(The Valley era)
lynkfox 373
Pedantic note: there is actually no need to rez Adonis during the end of the runner's turn. There is a rez window on the Corp turn before 'the beginning of the turn' exactly for rezzing cards like this. Everyone thinks you have to do it on end of runner turn because that is how it was in original Netrunner. — Ber 22 Apr 2015
Pedantic note #2: There are actually exceptions to your rule of when to rez it. The most prominent of these is during a Vamp or Account Siphon run, if you can deny the runner the credits they are about to steal from you by investing them in the Adonis Campaign. Along those lines, it can be used as a credit sink for any credits you are about to lose and would like to use on SOMETHING (i.e. your The Root is about to be trashed, and you want to use the recurring credits before it dies). — Bigguyforyou518 27 Apr 2015
1

I would like to mention, for the new players that if you use this with Blue Sun: Powering the Future you can choose which order things happen in. Ergo, you rez this at the end of the runners turn, or the start of yours, collect 3, and then Blue Sun to pick it back up. This effectively nets you 3 for 1.

(The Valley era)
Catsodomy 67
Sooo basically Beanstalk... that can be trashed... and uses your ID power... and costs influence... — Kroen 23 Apr 2015
...and takes a turn to pay you... and requires 4 credits upfront rather than 0... — Kroen 23 Apr 2015
Except for the fact you can do this 20 turns in a row if you want. Its not the most economical approach, but Ive seen it generate copious amounts of credits. Not that anyone actually plays beanstalk. — Catsodomy 23 Apr 2015
But the runner is forced to deal with it unless they want you have a beanstalk every turn forever — hexen36 23 Apr 2015
@Kroen: All of the above - on top of inclusion of a usual, proper Beanstalk. Not that Beanstalk is played anywhere outside BABW... — quiciuq 23 Apr 2015
Right, no one plays Beanstalk, so why play an inferior version? 3c isn't that hard to deal with, and then you're left with way less economy. Sure, you can protect it, but then it becomes even worse. — Kroen 23 Apr 2015
Two things - first of all, if you protect it for just one turn, it's suddenly six credits. Secondly, protecting it isn't actually that bad in Blue Sun. You can pick up things whenever you like, so building a (say) 2-ice server and profiting off Adonis in it until they manage to get in is fine - pick up the ice and put it elsewhere, and you've recouped your investment. — presheaf 23 Apr 2015
its beanstalk with byback though. I mean don't people like marked accounts? also you can make a lot more than 3 credits per click. Its inferior to beanstalk the same way opus is inferior to armitage codebusting. — GammaCodeX 23 Apr 2015
I've done quite a few games using the Adonis + Blue Sun engine, and it works really well. The Runner will eventually burn the click and the credits it takes to knock this out just because they're tired of watching you start every turn with +$3 — KitsuAeryn 24 Apr 2015
U can use it long the match. Simply, before last3 credits, take in hand for 4.amd u have gained 9 with 1 click, in 3 turns — SlayerCNV 29 Apr 2015