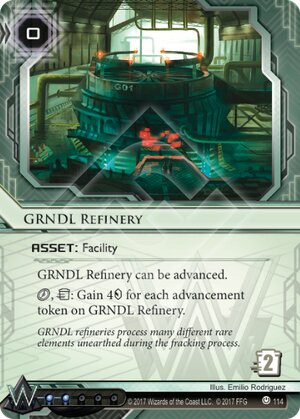 GRNDL Refinery can be advanced.

GRNDL refineries process many different rare elements unearthed during the fracking process.
Illustrated by Emilio Rodriguez
Decklists with this card

This asset is great for baiting runs because the asset is still useful if they don't take the bait. A fully stacked install-advance-advance/runner turn/advance-advance-trigger will net you 12 credits profit for 6 clicks and one card. The downside is that you might find yourself wishing you scored an agenda in that window instead, so you really want to be able to convert those credits into a scoring window (with Ash, SanSans) or taxing ice installs the turn after. If they succeed in running and trashing it, make sure the run was more taxing for them than for you too. Requires more investment than Melange Mining Corp but can net more profit the turn after installation (barring Biotic Labour installs). If you have a Trick of Light to spare and would rather have money than an FA-ed agenda (because things are going rough) Weyland can pump this card up in a pinch. Mushin No Shinning is also and option in shell Jinteki, creating a potential 21 credit net profit after 2 turns (although these decks are typically operated on the cheap).

(Order and Chaos era)
JohnnyMilton 1038
For one point of reference I look at Thomas Haas may serve a similar role in baiting a run. As a Mushin target I'd feel much better laying Thomas as he'll be able to trash himself if the runner does choose to access him. GRNDL Refinery strikes me as something you want to give at least a little more though in protecting only because it is so easily trashed if accessed. Of course there's a huge difference in credits between the two cards but if you're looking to just bluff the runner Thomas may be a better choice. — SPHNX 4 Mar 2015
No it doesn't make any sense to Mushin Thomas Haas, since Mushin specifically says the cards can't be scored or rezzed until the start of your next turn. — Wolfknight 5 Mar 2015
Probably goes without saying, but GRNDL is a great asset in Gagarin Deep Space decks, especially supplementing PAD Campaigns. They need to get rid of the PAD's, but that costs 5. They simply **can't** let you score a 4/2 or over advanced Atlas, so they will check your "install-advance" servers relentlessly. More often than not, they'll trash the GRNDL Refinery and be juuuust too poor to trash your PAD Campaign :) — PaxCecilia 6 Mar 2015
I would say less useful as a bluff than as a "test the waters" card. If the runner goes for it, no major loss, but if they don't, they may have trouble getting their rig set up or simply be focused elsewhere. In which case, as the OP said, just take the cash and move straight on into an agenda. — lobotomy42 22 Jul 2015
1

I really don't see why nobody plays this card. Consider the following: Install refinery Dedication Ceremony Trash refinery Gain 12 credits. Not a bad economy engine. And Weyland has so few bluffs, it isn't even funny, so take them where you can get them. Maybe slap this behind your main scoring server, and force the runner into running a taxing server. Weyland has such bad asset economy and such good gear-checking ice that protecting this shouldn't be a problem. It even has a nice synergy with Gagarin Deep Space: Expanding the Horizon, because it makes it all the more taxing to trash. Also try in a server with Simone Diego in a Weyland Consortium: Because We Built It deck for maximum profits!

This is what Weyland considers as a trap. It either had to end the run or make money. Given that it is an asset, it could not end the run so we have to live with the money.

GRNDL Refinery is not a bad card. The only issue with it is that if you could get this card to net you 10+ credits, you could also have advanced and scored a 4-advancement agenda. And the windows in which you can do this are not that large nor that common. This makes this card as a great tool to learn where the windows for scoring are in your games. The other thing about this card is that it is a great way to force runs from the runner through a thick server. Still, there are better cards to have the runner run out of money (Reversed Accounts).

I believe that we have moved on for our economy to more operations and advertisements. This card still has its niche where it shines though. Play it in decks with bonuses for advancing cards, like Oberth Protocol, Dedication Ceremony or Tennin Institute: The Secrets Within.

(Crimson Dust era)
Severijn 540
There's another problem; it's not even very good money most of the time. Say you play it out (as you suggest) like a four-advancement agenda. It costs you 5 clicks (IAAATrash) to net 9 money after you factor in the cost of advancing. In the event that you want to use a remote to make slow, unwieldy money and bait a run, Melange Mining Corp is probably better (it's a smaller payoff, but doesn't require pre-emptive advancement and baits a run even after you fire it). As Melange isn't generally thought of as great, that's a pretty damning comparison. On top of that, it's also comparible to Melange in the way that its low trash cost makes R&D porous. The only thing that makes it worth considering IMO is if your deck is already running two or three Dedication Ceremonies. If that's the case then a one-of GRNDL could be a nice suprrise boost. — Greasythumb 10 Dec 2017