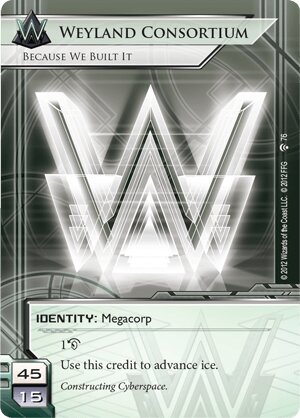 Weyland Consortium: Because We Built It

Use this credit to advance ice.

Constructing Cyberspace.
Decklists with this card

Ahh #02076, why are you the worst ID?
Who wants to spend exactly 1 click per turn advancing ice? No one.

However, with the addition of morph subtype ice in the lunar cycle, this ID could stand to have a second opinion.

Since it was released, BWBI has classically been a late game ID. Weyland Consortium: Because We Built It builds up momentum by advancing its ice (usually Ice Wall) to monstrous levels appealing to late-game taxing. With a near-mandatory of 3x include of Trick of Light this leaves a nice number of targets for moving advancements. Commercialization is also a late-game opportunity for large monetary gains.

Before the lunar cycle, this was pretty much the limit of strategy for the ID, and each of these things can be done better with in-faction Trick of Light in Tennin Institute: The Secrets Within or the econ boost from the beginning in Weyland Consortium: Building a Better World

With the addition of Morph in Lycan and Wendigo and Changeling as well as Will-o'-the-Wisp, the corp can force the runner to get out their rig before being able to run effectively while building up free tokens, and preparing more formidable ice for a scoring server.

As an additional possibility, for better biting ice try Executive Boot Camp with Woodcutter or Salvage. Tyrant is bad no matter how you cut it.

As always, Meat damage is a plus in Weyland Consortium: Because We Built It, but since the ID tends towards late game, putting the pressure on with tags is recommended to prevent aggro from runners.

(Up and Over era)
stonec 69
I am surprised that nobody has yet re-reviewed this and addressed the space ice that has since been released. This plus space ice is a little bit like clicking for 3 once a turn. Probably still worse than what Blue Sun is doing, but it's worth a mention at least. I will probably fail to make such a deck work, but I intend to at least try when I get around to buying O&C. — Raiddinn 25 May 2016