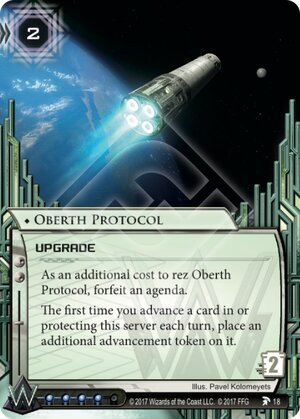 As an additional cost to rez this upgrade, forfeit 1 agenda.

The first time each turn you advance a card in the root of or protecting this server, place 1 more advancement counter on that card.

It's a Weyland's fast advance upgrade.

While it's tempting to view Oberth Protocol as purely a way to fast advance agendas the ability to advance ICE is not to be underestimated. Often you will not have an agenda ready to advance and being able to use the ability to boost ICE instead can provide value in the long run. Additionally the ability to install and rez ICE like Wormhole in a single turn plus 2 and install cost can make protecting the scoring server much easier.

Note that Oberth Protocol is not a region, so you can combine it with e.g. Oaktown Grid to make trashing Oberth Protocol a bit more expensive. The usual defense upgrades work as well.

It's possible, though expensive, to side step with forfeiting of an agenda using Eliza's Toybox. If using this in NBN (why?) License Acquisition works. In Weyland you also have the, admittedly hard to pull off, option of New Construction.

Thematically this card belongs to Jemison Astronautics: Sacrifice. Audacity. Success. and in that identity the forfeiting of an agenda can be used to trade up an agenda:

Presto, you've upgraded an agenda and rezzed Oberth Protocol for next turns.