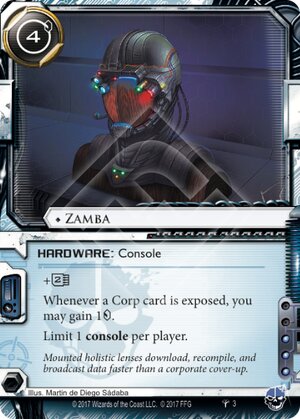 Whenever a Corp card is exposed, you may gain 1credit.

I was writing this review to make a point that Zamba is pretty weak. Only problem? It isn't.

Zamba plus GPI Net Tap is pretty good. It's 1 credit per unrezzed ice approached during a run. Let me just remind you what bad publicity is, you know the thing corps are so scared about: 1 free credit per run only usable during a run. Zamba + GPI Net Tap is 1 credit per unrezzed ice (determined at time of approach, so ice that got rezzed this run counts). This means that as long as the corp doesn't rez a piece of ice you get extra money. Oh, and of course you're free to derez ice yourself and the next time you'll get the credit.

In combination with cards like Rubicon Switch and Keros Mcintyre a derez based strategy could be pretty economical. Assuming for the moment that the corp can rerez ice the next time you approach it you pay the cost of ice with Rubicon Switch to derez and get 2 from Keros and 1 from Zamba + GPI Net Tap the next time you approach that ice. On ice that costs 3you break even, only spending 1 click to derez the ice and the corp loses 3 to rerez. More than that and you lose Rez cost - 3, less than that and you gain credits (though the corp loses very little credits in the process).

Of course what's most fun is to derez a really expensive piece of ice, perhaps with Emergency Shutdown and then when the corp can't rerez it fly by it and get money in the process.

As for other cards Zamba combos with, well it's less great. Here's a list of other non-rotated runner cards that expose corp cards:

It looks like the Kitara cycle is going to have more criminal cards that expose corp cards so Zamba may in a few months not just be good with GPI Net Tap.

(Sovereign Sight era)
Silv 323
Great review! Using cards that make rezzing painful like Leave No Trace, Run Amok, or even Xanadu also nicely compliments the GPI strategy. — cinnadream 4 Jan 2018
The deck that uses this and GPI should use Aumakua. Each time you use GPI, gets one counter. — LuteMiope 7 Jan 2018
The foutth option of Deuce is the best one anyway :) — Syntax 31 Jan 2018
Does this work with [Enhanced Vision](/en/card/08005) too, or is that a different effect? It's "reveal" versus "expose". I mean the words are different but the effects feel the same. — Infectiou 5 Feb 2018
I think it's a different effect. You can only expose installed cards. While you can reveal cards in hq, rnd etc — ruby272 12 Feb 2018