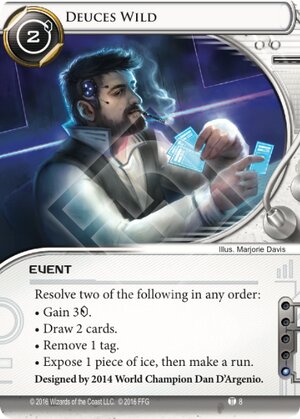 Resolve two of the following in any order:

Deuces Wild Is a Criminal Card

Or at least it fits criminals better than anyone else. To get into why you fist need to realise that it's actually a poor econ card as it requires other things before you can get any tangible econ out of it (like a Tag or Prepaid VoicePAD). It's better compare to a draw card like Diesel since the first 2 options are the only ones you can guarantee full value out of.

When looked at this way it's a slightly worse Diesel that costs 1 influence and has the flexibility to be an econ card in the right situations, all in all not bad but as a Shaper / Anarch you have good draw free of influence so it's unlikely you'd want to spend influence on this. Criminals & the Mini runners however don't have any good draw so that's one reason why it's going to fit them better. Criminals also have cards in faction that can turn this into econ and criminals generally run tho's cards anyway.

This is all not to say that it wont fit any other faction you could run cards like John Masanori / Datasucker to get more value out of the "run" option or Vamp / Code Siphon to get value out of the "Tag" option but it already fits most criminal decks without changing anything which in my mind makes it a great criminal card.

(23 Seconds era)
Pinkwarrior 2337
After searching some time for a good draw splash, my conclusions agree with you. Non-J.Masanori Criminals lack draw power, and Diesel takes up too much influence. The flexibility of this card makes it worth the 1 influence in Criminal. — Zanc 29 Jul 2016
5

This is the third "World Champion" card, out just 5 sets after the last one, CBI Raid. And before that, we've had a very long wait since a little card called Architect. Now if you've played Netrunner competitively I'm sure you'll understand the pure face-checking dominance and staying power of Architect, but CBI Raid has had more of a mixed result and just doesn't see that much play (although I maintain it's excellent for avoiding Scorched Earth in Apex: Invasive Predator). Where does Deuces Wild fall between the two?

Let's look at this card line by line. You can see immediately why it's a good thing Prepaid VoicePAD ended up on the naughty list: Deuces Wild is a money making event and two credits is just the sweet spot for Prepaid VoicePAD users to go from nothing to something. For Prepaid VoicePAD players, a single "Gain 3" routine is like splashing an Easy Mark outside of Criminal, and it's great for getting you off rock bottom so you can use Lucky Find without clicking for credits.

Drawing 2 cards for 2 credits isn't a great deal, on the other hand, but since cards are still worth more than credits, it's not something to complain about. Same can't be said for removing a single tag or exposing ice and making runs: 2 credits to remove a tag is what you could do already and combining Infiltration and Early Bird for one more credit and some more flexibility isn't exactly a great deal. Sweetening the deal with Prepaid VoicePAD helps, but most of these things could be done for fewer creds already with Diesel, Networking and the aforementioned cards. None of these routines make a full card.

But that's fine, because Deuces Wild has a trick up it's sleeve. You can do TWO routines. "Gain 1 and draw 2 cards" is like hitting Symmetrical Visage and drawing up in a single click. "Gain 1 and remove a tag" is a credit positive Networking. "Draw two cards and remove a tag" is half a Lawyer Up. Gaining credits and running with an expose? Drawing cards and running with an expose? Those are better than whatever you were trying to do with Recon. Hey, here's a fun move: if you're worried about running last click and hitting a Snare!, Data Raven or an Argus Agenda, make a run and then afterwards see whether you need to remove the tag. If not, you can still get some money!

EDIT: In the (currently upcoming) FAQ it apparently says that you cannot choose the same routine twice. All of the above still applies, but this next section is no longer possible (although I will leave it in for comments' sake.) This makes the card not nearly as powerful as I make it out to be, but it may still serve a place in Prepaid VoicePAD decks.

But the real ace in the hole comes when you notice that Deuces Wild doesn't say "Choose two of the following and resolve them in any order". Imagine if it said this:

"Resolve one of the following:

That first line makes up Sure Gamble level money making, but for 2 credits. Drawing 4 cards for 2 credits is most of a Quality Time, for a more reasonable price. Removing two tags just has not been possible in a single click, but remember it enables Same Old Thing into Account Siphon without floating anything afterwards. And that double run is also nothing we've seen before. It's almost a Satellite Uplink + plus an Early Bird plus another run but it's way cheaper and that's just weird.

In fact, all of those routines sound like playable cards to someone. Sure, it comes in at one influence for every faction, but Criminals have imported Quality Time and Easy Mark has found it's way out of faction before. And Prepaid VoicePAD would justify all of those cards even better. But what really makes this a wildcard is how you get to choose. Not just the 4 that I've mentioned there, but all of the other combinations. In just one deckslot.

Deuces Wild isn't just versatile, but what it does is perfect for so many decks, regardless of whether they run Prepaid VoicePAD. Expect to see this card in everywhere. Criminals love the draw and tag removal, Prepaid Kate gets a new toy, and Adam: Compulsive Hacker and Apex: Invasive Predator get the additional event economy card that they sorely needed.

So before you waste influence on some silly little tech, consider:

Is this your card?