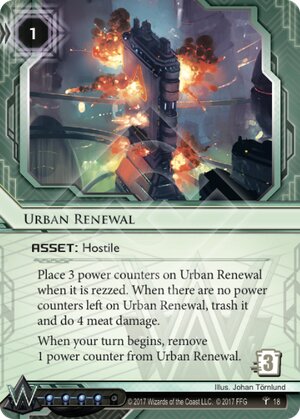 When your turn begins, remove 1 power counter from Urban Renewal.

Illustrated by Johan Törnlund
Decklists with this card

One of the most interesting and gutwrenching cards to come out in a while, Scorched Earth in asset form and a real ticking time bomb. My inner sadist already loves this card.

While seemingly overpowered, giving 4 meat damage for a measly 1 credit and click, without the need for an agenda to have been stolen or a tag, there are a couple of facts which balance it out. First off, unless the runner has a lower hand size or managed to not draw up during their previous turn, this can never be a kill by itself and will need additional support. Secondly, it has a pretty hard counter in the form of Political Operative, a card at 1 influence and answer to lots of corp cards. And thirdly, the runner will always have 2 turns to run and trash it after it is rezzed. This sense of urgency will create tense and dare I say fun situations where runners will have to be on their toes and think about whether they can afford to go into an expensive server to trash it, or whether they will have to brace for impact.

It has the potential to be meta defining and maybe it will prove too broken. But right now think it will give rise to even more tense games, which I love in Netrunner.

(Sovereign Sight era)
Cpt_nice 1714
I've been seeing this a lot on Jnet and as a runner I am yet to have one fire on me - I've always managed to trash it before it hurts me. As such, it's effectiveness outside of a deck that is built purely to protect and fire it, is questionable. BUT, what it does do is force you to run... It's 4 meat damage is almost secondary to it's ability to raise the runners blood pressure n make the tackle a potentially nasty server of ice and upgrades. I love the psychology this card adds. At the moment I see it as a very welcome addition. — SubTric 11 Jan 2018
This forces the runner to run or suffer the meat damage. Combine this with [Warroid Tracker](/en/card/12068) and the runner will have to either take the damage or loose installed cards or spend a ton of credits. — Infectiou 26 Jan 2018
I think Councilman could be a decent counter to it as well. Rez cost is cheaper here, and also UR will get counters from both rezzes, so it will be delayaed for really long time. And if you have Fall Guy you can do it all over too. — Deo 14 Feb 2018

Using Fall Guy prevents Councilman's effect from happening. But Councilman alone still does get you the extra counters, nice.