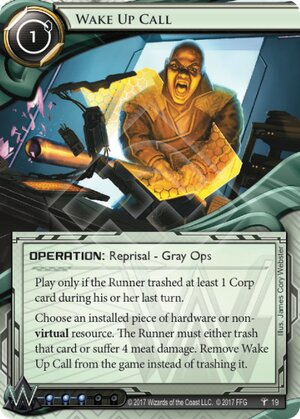 Play only if the Runner trashed a Corp card during their last turn.

Choose 1 installed piece of hardware or non-virtual resource. The Runner must either trash that card or suffer 4 meat damage.

Illustrated by James Cory Webster
Decklists with this card

This card is exactly what Weyland needed. A thug ith a baseball bat smashing the runner's fingers saying, "No!" after they trash your Multibillion credit mining industry. Seriously, this card is great. Punishment has always been a concept trodden lightly upon, but never really explored. We got Hellion Beta Test in Flashpoint, which was a good start, but I think this card is even better.

costs a mere 1 credit to use

Does not rely on tags or other prerequisites other than a trashed card, which is very easy to arrange

Can cause a chain reaction effect if used to destroy memory giving consoles. Additionally, many runners throw away their extra copies after they've found one, this could make that a painful mistake

Multiple copies can utterly destroy a runner's boardstate. Taking the hit from one copy leaves the open for punishment by another

Removes itself from the game, but I doubt you'd need to recur it

4 meat damage seems like a huge setback, but some runners would rather take the hit and can even benefit them if they are running I've Had Worse or Clan Vengeance

(Sovereign Sight era)
Handsome Jack 1603
Can't be nullified by sacco — taneru 29 Dec 2017
Okay, now that I am on something that won't post my comment before I finish writing it, It can't be blocked by SacCon. The runner is given a choice: Trash that card, or take 4 meat. If they trash the card, then prevent the trash with SacCon, then they didn't trash it and as such, they take the 4 meat. — taneru 29 Dec 2017
You CAN use SacCon to prevent the trash. Same reason you could prevent the Data Raven tag with Decoy / NACH. But it is easy to get confused with "additional cost" rulings of Obokata and Ben Musashi. — PureFlight 30 Dec 2017
I asked ANCUR on Twitter for a clarification of the point about SacCon and Wake Up Call: https://twitter.com/ANR_RulesWiki/status/950936061919686656 — lunchmoney 10 Jan 2018