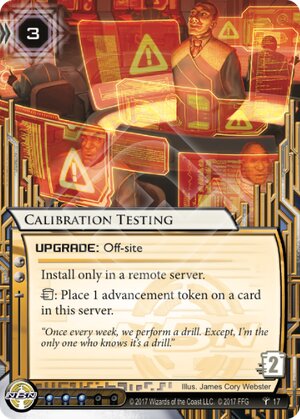 trash: Place 1 advancement counter on a card installed in the root of this server.

"Once every week, we perform a drill. Except, I'm the only one who knows it's a drill."
Illustrated by James Cory Webster
Decklists with this card

It's suitably costed, both to rez and trash, unlike SanSan's ungodly 5 credit trash cost, and being single use means that you can't just windmill agendas like you could with SanSan.

Regardless, this is genuinely strong, and expect that most NBN decks, be it CTM, Sol, or NEH, will run 3x of these bad boys to score out effectively vs a runner that fails to trash these.

Whether thrown out in the open among PAD Campaigns, or behind a couple of nasty taxing ice, the runner has to respect the threat this card poses... especially since they can be stacked to score bigger agendas, or score out from under the nose of a Shaper who's a little too pushy with when they are willing to grab Clot.

(Sovereign Sight era)
Quarg 255
For NBN, sure, it's just a trashable SanSan. But with HB assets in play, this card is absolutely disgusting. With three Team Sponsorships down and a Breaker Bay Grid server, you can start to score two, even three agendas in a turn. — CelestialSpark 29 Apr 2018
3

The SanSan City Grid for a post rotation game. Way more fair but definitely playable and could easily become a staple in NBN decks so they can fast advance again. Decent rez vs trash cost, not susceptible to Political Operative and can still be countered by classic anti-FA tools (looking at you, Clot)

Between Sansan, Breaking News and Astro it is becoming more clear as time goes on why so many people still hate yellow to this day. I see this card as a great compromise and a perfect way to herald a new age for FA in NBN. May it never be as disgusting as before.