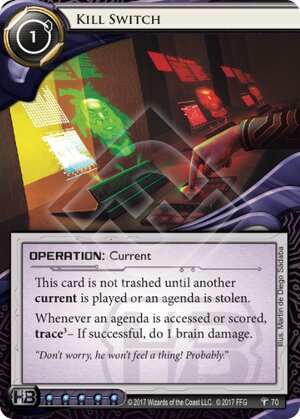 While the Runner is accessing an agenda in R&D, they must reveal it.

Whenever an agenda is accessed or scored, trace [3]–. If successful, do 1 brain damage.

Anyway, Kill Switch is yet another HB card in this cycle that is trying to keep the dream of a competitive brain damage oriented deck alive. Is it a good card? Is it even decent?? Let's take a look.

First off, it is a cheap current, which is always nice. As long as Kill Switch stays in play, every time you score an agenda, you will get to fire a trace and have the possibility to knock the runner on the head for MASSIVE DAMAGE. Not only that, but KS also fires on the runner accessing an agenda, meaning that even if the runner steals one immediately after you play this, you will still get some value out of it.

I say "some value" and I mean that quite literally. I mentioned the issue with cards like these in my review of Kuwinda K4H1U3. Trace 3 is a lot better than trace 0, but it is still not fantastic. If you want this to definitely fire more than once, you will have to proactively score agendas, which costs money, which is cash you won't have to be boosting traces.

You could try a HB deck which combines this with a fast advance win condition. Add Domestic Sleepers and cards like Project Vitruvius to let this fire as often as possible. But that sounds like a lot of work just to have a trace which the runner can outpay. Another possibility is splashing it in a kill deck out of faction, maybe Jinteki PE with cards like Clone Retirement or Project Kusanagi? But unfortunately this card is a whopping 5 influence, so good luck building that deck.

Lastly, this card joins the long, long list of cards that Film Critic takes a dump on. The ever growing list. Also, there are high link runners such as Sunny, Geist and Kim to consider.

Not a great card, but I will have fun with it regardless. Maybe it is time to dust off Custom Biotics and see what jank I can make with this and Tempus.

(The Devil and the Dragon era)
Cpt_nice 1549
Do note that Clone Retirement is no longer legal. What did you have in mind for a Custom Biotics deck? I like splashing for Urban Renewal. Or did you mean Cybernetics Division? — BlackCherries 18 Apr 2018
Oh I forgot about that. — Cpt_nice 18 Apr 2018
No I meant Custom Biotics. I was working on a deck list involving domestic Sleepers and 5-3, combined with EOI and Sea Source. Add Primary Transmision Dish to make traces easier to fire and it synergises with Kill switch. Add some Weyland cards to threaten kill if the runner has a lower hand size. — Cpt_nice 18 Apr 2018
This is what I had in mind for Kill Switch - seems good against anything that isn't link heavy. — LynxMegaCorp 18 Apr 2018
https://netrunnerdb.com/en/deck/view/1114312 — LynxMegaCorp 18 Apr 2018