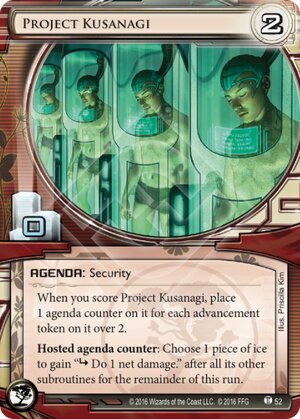 When you score Project Kusanagi, place 1 agenda counter on it for each advancement token on it over 2.

Hosted agenda counter: Choose 1 piece of ice to gain "subroutine Do 1 net damage." after all its other subroutines for the remainder of this run.

Illustrated by Priscilla Kim
Decklists with this card

What a wonderfull card! Although having zero-point agenda may look weird at first because what player would want keep his agenda density high? Till that point there was only one attempt in creating such agenda Domestic Sleepers, however after paying 3 it transformed into 2/1. Now we got another 2/0 agenda, this time for Jinteki.

Jinteki, as a whole, is corporation that benefits from wide range of tricks and every Jinteki ID to date had ability that could made your opponent nervous. Obvious candidate for overseeing development of Kusanagi is Jinteki main HQ i.e. Jinteki: Personal Evolution. As I see it,it can be used three ways:

And of course at the end of the day this card is obvious choice for every "Ghost in the shell" fan!

(Escalation era)
Beyo 6
Hold on, hold on! Benefit No. 5 isn't quite right... PK adds a sub AFTER all other subs, so when the first sub of a Trap resolves and trashes that trap, the trap is gone and can't fire it's additional subs, because the encounter has prematurely ended by the ICE being trashed. That makes PK completely useless on any ICE that trashes itself (as all Traps do) or ends the run (thus ending the encounter, too). — Krams 11 Oct 2016
Use it on an excalibur — YankeeFlatline 11 Oct 2016
I think this is a decent agenda for PE but is probably not worth it in the other Jinteki IDs. It has good interactions with in-house cards such as philotic entanglement and Batty with destroyer ICE. Jinteki could also use this with imported cards like archer and exchange of information - it has some potential. — DGB123 12 Oct 2016
Additionally, Kitsune has an optional trash ability so if the runner isn't running AI breakers then you can fire the net damage this way. Other good ICE to use this with would be crick, and lockdown as they both have high strength and low rez costs. — DGB123 12 Oct 2016
Krams: Damn you're right :( — Beyo 12 Oct 2016
Thinking about Core Jinteki it wouldn't be a bad idea to have a bunch of essentially "trash" agendas to give the runner another chance to steal something they can't use that still deals damage. Alternately if you have a porous server with something obvious at the end and the runner knows exactly how much damage they are going to take to get there adding just +1 more could break their thinking. — killj0y 20 Oct 2016
I've been using this in PE as Philotic Food, net damage, and targets for Stock Buy-Back - and the latter has paid off well. — Mechanoise 26 Jan 2017

Wdym with the board interaction? The board is unique right?