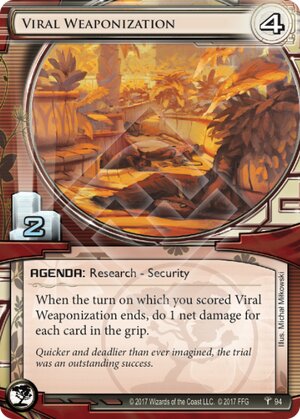 When the turn on which you scored Viral Weaponization ends, do 1 net damage for each card in the grip.

Quicker and deadlier than ever imagined, the trial was an outstanding success.
Illustrated by Michał Miłkowski
Decklists with this card

Viral Weaponization trashes the runner's grip, taxing them ~5 clicks. It also has the side benefit of disrupting their game plan. Nisei MK II, when used on a scoring server, would cost the runner a click and a massive amount of credits. It can also open a scoring window.

Edit: There are cases where removing the cards in the runner's grip is better than ending the run, such as hurting the runner's tempo or as part of a mill deck.

(NAPD Multiplayer era)
Apex Predator 29
Amani Senai — groenkaaf 9 Sep 2018
Influence 4 hurts, and it can be prevented due to the trace, not to mention that you need to protect it and the agenda at the same time. The net tax from beating the trace would be ~4, since any more would require you to spend credits. It would only have utility by opening a scoring window if the runner has less credits than you, and you still have to outspend him. — Apex Predator 9 Sep 2018
Nisei MK II does the same without needing Amani Senai. — Apex Predator 9 Sep 2018
Not every gameplan needs a Nisei token over net damage. Any Jinteki deck that wants to grind you out could gladly use this agenda. Combo it with Mental Health Clinic for maximum damage. — BlackCherries 9 Sep 2018
Comparing this to Nisei is kinda pointless cause they do vastly different things in different decks — Cpt_nice 10 Sep 2018
Thank you for telling me, I now understand how this agenda is supposed to be used. I will edit my original post. — Apex Predator 10 Sep 2018
Still editing — Apex Predator 10 Sep 2018
The trick is of course that you can play both Nisei MK II and viral weaponization. You also play gene splicer en NGO front for the bluffing potential. — Severijn 3 Oct 2018