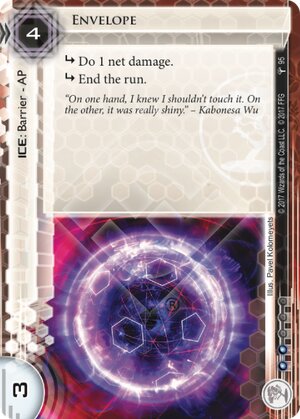 "On one hand, I knew I shouldn't touch it. On the other, it was really shiny." - Kabonesa Wu
Illustrated by Pavel Kolomeyets
Decklists with this card

“On one hand, you knew you shouldn’t slot it in your deck. On the other, it was really shiny.”

Envelope, the latest addition to the Jinteki Barrier-AP suite, doesn’t have quite the lethality of Chiyashi or Wall of Thorns so its most similar comparison is Kakugo. Kakugo costs the same to rez, has 2 less strength, but comes with unbreakable net damage which makes it great for setting up Obokata Protocol remotes and the like.

Wall of Thorns’ little brother can’t deal out unbreakable net damage but it can be a gearcheck ICE with an unexpected facecheck penalty. Unfortunately, it’s not a very good gearcheck ICE as Clippy will be getting through it for 2. By slotting in Wall of Static, you could have got the same break cost for a credit cheaper.

So then Envelope's saving grace must be its facecheck penalty and even that’s a bit questionable. Yes, each net damage adds up (especially in Jinteki: PU) but you could have spent 4 credits to rez Neural Katana instead and got an ICE that actually bites. You might say a wary runner always gets their killer up (or in the heap if it’s MKUltra) before they start running without needing to find their fracter but nowadays, there are even code gates that a corp can use that can deal some serious facecheck punishment.

TL;DR – While Jinteki did need cheap-to-rez barriers (they only have Himitsu-Bako and Kakugo!), the numbers on this make it hard to warrant a deck slot. For surprising a runner without using a Sentry, there are tons of viable Code Gates these days to use that should be slotted in before Envelope.

(Whispers in Nalubaale era)
BlackCherries 349
One thing I failed to point out in this initial review is that if you need a TTW deterrent, this card is excellent, although a tad pricey in influence to splash for. An obvious comparison in deterring TTW runs would be Enigma so slot either as needed. — BlackCherries 12 Sep 2018
I don't know how paople make reviews and comments that link to the cards they talk about... Anyways, I think of this as an in-between of Neural Katana and Wall of Throns. On One hand, it is cheap and has a facecheck penalty, but not as good as the Katana. Not being vulnerable to mimic and forcing all Fracters to pay at least 2 credits (instead of Mimic's 1 to break Katana) means that it is better at taxing once the suprise is gone. — Personal Snare Iris 25 Sep 2019