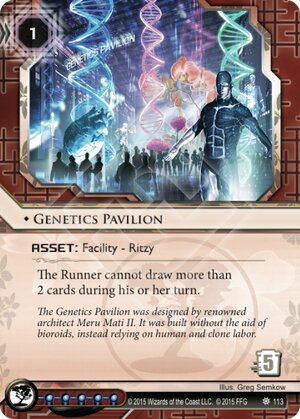 The Runner cannot draw more than 2 cards during his or her turn.

The Genetics Pavilion was designed by renowned architect Meru Mati II. It was built without the aid of bioroids, instead relying on human and clone labor.
Illustrated by Greg Semkow
Decklists with this card

As a Jinteki asset, you should investigate its interaction within shell-game builds, especially Jinteki: Personal Evolution and Industrial Genomics: Growing Solutions

The ability is a hard counter to bulk draw such as Diesel & QT, most uses of Game Day, Independent Thinking, Levy AR Lab Access, Lawyer Up and FIS, and the best counter to death-by-a-thousand-cuts Jinteki. IHW. By a quirk of the rules, it also reduces the utility of Mr. Li being used more than once.

The card works wonders with "discard your hand" abilities such as Komainu and Psychic Field, allowing for a follow-up two-advanced Ronin to nearly always flatline the runner during your turn. It also pairs wonderfully with Mental Health Clinic, as an extra hand-size you can't easily reach is a useless measure in a non-brain damage kill deck.

However, special mention should be made of cards like Drug Dealer, Astrolabe and instant-speed effects such as using "Geist" during the corp's turn to draw multiple cards outside of Genetic Pavilion's purview.

Outside of best-case scenarios and avoiding bad matchups, the effect is not strong enough to compete for deck slots. If it were to count during both turns, or even more amazingly across both turns, it would serve as an amazing counter to Faust / Drug Dealer decks that munch through their own hands while still floating above a kill-shot.

Once this is rez'ed you are hoping for three cards to be leaving the Grip per runner's turn, which outside of Ronin, Neural EMP or PE ability is dependant on the runner having to react to your plays. This means that a passive shell-game build that allows the Runner to build up their hand turn-over-turn that best compliments Ronin will not be enough to push this card over the top.

There have been better results with IG, especially in "Trash Panda" decks where you can leverage News Team to trash resources like Drug Dealer and otherwise make running archives a pain with Space Camp. Threatening to win is always a better solution than trying to assemble a kill.

(Data and Destiny era)
PentagonJR 33
Seems like it'd also wreck Faust. Does it? — TheNameWasTaken 28 Dec 2015
It can reduce the ability of a Faust user to put cards in their hand. Whether or not it wrecks that player's game kind of depends on what ICE you have out. It's frustrating, but I wouldn't say it wrecks Faust. Notably, if they are using Drug Dealer to buff their hand, this won't have any effect on that draw as it happens on the Corp Turn. They can still get two cards on their turn in addition to those two, which is typically plenty enough for them to do what they need to do. — GrantZilla1979 28 Dec 2015
I'd say if you are worried about Faust, Lockdown is a better choice. I could see this card being really useful in Industrial Genomics though. — WayneMcPain 28 Dec 2015
It's not bad in IG at all. Throw it together with Hostile Infrastructure if you want to be just a massive jackass. Which is half the fun, really. — GrantZilla1979 28 Dec 2015
1

Not a review, but a question from a new player. How do the rules work in terms of which cards take precedence? If the corp plays this card, would it overrule the draw abilities from stuff like Diesel, Quality Time, or Lawyer Up?

(The Valley era)
Ineti 2
All of your example cards would draw 2 cards. — Kroen 15 Apr 2015
The above is correct. In addition, negative effects (those that stop you from doing something) always take precedence over positive effects - see [the ANCUR post here](http://ancur.wikia.com/wiki/Negative_Effect) — Toomin 15 Apr 2015
Cannot" — AchromaticSky 15 Apr 2015
"Cannot" always overrides "can". If you encounter Excalibur or Ouroboros and are prohibited from making a run, would you expect to get around that by playing Inside Job? — AchromaticSky 15 Apr 2015
Please ask questions on BoardGameGeek or reddit.com/r/netrunner - There is no reason to pollute this reviews section with questions. — Ber 16 Apr 2015