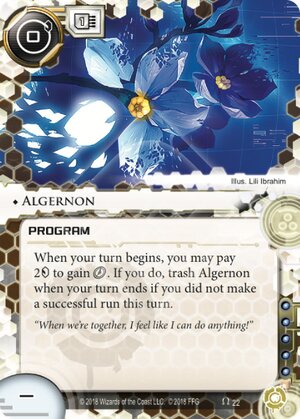 When your turn begins, you may pay 2credit to gain click. If you do, trash Algernon when your turn ends if you did not make a successful run this turn.

"When we're together, I feel like I can do anything!"
Illustrated by Lili Ibrahim
Decklists with this card

[H0tl1ne here, with another flavor review.]

The title and the card art are both a pretty clear reference to a short story by Daniel Keyes, titled Flowers for Algernon.

The story describes Charlie, a mentally challenged thirty-seven years old, working as a janitor in a plastic box factory, who undergoes a miraculous medical treatment which, over the course of several months, increases his mental capabilities significantly, to the point of fluently operating several foreign languages and conducting medical research by himself.

Algernon from the title is a lab mouse the treatment was first tested on. As a part of the experiment, both Charlie and Algernon take part in solving maze riddles. Earlier in the story, Algernon easily bests Charlie and the man grows to resent the mouse, but as the treatment progresses, Charles manages to solve the maze faster than the rodent does. He ends up loving and caring for little Algernon.

In time, however, the effects of the treatment eventually reverse, first observed with the mouse's erratic behavior, loss of motor function and, finally, death due to severe neurodegeneration. Charlie accurately percieves it as a grim prediction of what is going to happen to him. The depression takes him over when, despite his efforts to resist the change, he forgets everything he has learned since the beginning of the treatment. The story ends with his wish that somebody leaves flowers on Algernon's grave in the backyard when he's gone.

It's a very touching story, and a pretty accurate description of retrogenesis, an occurrence common with people suffering from Alzheimer's disease (the fresh skills and knowledge are the first to vanish from mind - the degeneration of the brain is just like its development in prenatal state, only as if seen in reverse). Seeing it referenced by a card in my favourite game was like a sudden kick in the feels.

The reference itself is pretty elegant - having Algernon on board lets you ramp up fast with more clicks per turn, even overcoming the very flaws you were born with. That is, to a point where it ultimately fails, trashes and plunges you back into the dark state you were trying so hard to get out of.

Flavor aside, it seems like an interesting piece, if only to be found exclusively in Adam (five influence cost should be enough to discourage combo artists trying to replace the now-banned Hyperdriver). You have to pay for your additional clicks, and when you do, you better make sure you can make the cut - or else you will come to a grinding halt. High risk, high reward, a strong effect that can tip the balance in your favor for as long as you can ride the wave.

I wish every card in this last expansion we ever get had a flavor this excellent. But then, Sportsmetal: Go Big or Go Home is somehow found in the same box, along with a few other baseball-themed pieces. How would these relate to the cyber struggles we so enjoy having? Hell if I know.