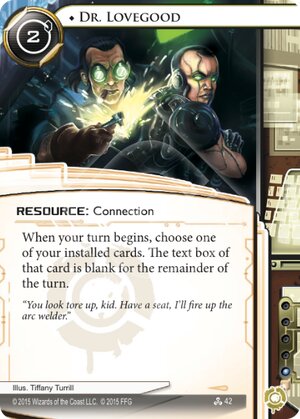 When your turn begins, choose 1 of your installed cards. That card loses its printed abilities for the remainder of the turn.

"You look tore up, kid. Have a seat, I'll fire up the arc welder."
Illustrated by Tiffany Turrill
Decklists with this card

This is an exceptionally cool card. I'm worried that what with the obvious synergies between Dr. Lovegood and Adam's directive cards, some of the less intuitive applications will go unnoticed.

Something that is critically important to understand about Dr. Lovegood is that the card is blanked only for the runner's turn, not for the corp's. Here's some applications to think about given that fact:

Donut Taganes: The corp is not going to be playing events on the runner's turn. That would be madness. Using Dr. Lovegood in conjunction with Donut Taganes ensures that the tax on events and operations remains exclusively on the corp's side of the board.

Here are some cards that have interactions with Dr. Lovegood that do not have to do with the fact that the text box is only blanked on the runner's turn:

Basically any card that has a mandatory loss in exchange for a situational boon. Cards such as Wyldside, Starlight Crusade Funding, and Hard at Work, could all potentially benefit from being turned off once in a while.

A strategically applied Dr. Lovegood to a Stim Dealer could potentially prevent/delay the damaging drawbacks of the card and effectively turn it into a more efficient Haas Arcology AI.

With an Aesop's Pawnshop or Chop Bot 3000 installed, a runner could blank a Muertos Gang Member and sell/chop it, preventing the corp from being able to rez a card for free while still making full use of the positive effect.

Most of the aforementioned is likely completely un-utilizable in a competitive way, and I know that. But that doesn't change the fact that Dr. Lovegood is cool. Mechanically, it explores a really interesting space that, while perhaps not necessarily good, deserves to be thought about.

(Data and Destiny era)
forktines 475
is his ability mandatory? feels like it, since there is no "may" — 153351 20 Dec 2015
Yes, but you could choose to blank Dr Lovegood for a turn if nothing else appeals. — lunchmoney 25 Dec 2015
Does this mean a Starlight Crusade deck is finally viable?? :-) — PureFlight 30 Dec 2015
Well, I ALMOST made an ass of myself by suggesting this be used with The Black File. Of course, when the File's text box blanks the corp wins on the spot if they have 7 or more Agenda points. — LordRandomness 2 Feb 2016
This will be able to be used with the Black File quite effectively, because it means you can leave it out until you really need it, at that point, don't blank the text box, start adding those power tokens and run run run! — Stratix 4 Feb 2016
This is possibly true, although it seems inferior to simply not playing the File until you need it...particularly since it loses the element of surprise. Still, I can see that having some utility in some situations. — LordRandomness 14 Apr 2016
It's hard to effectively predict exactly when you need the black file against fast advance. Once the Corp is at 5 points they are threatening to win at any time. If you play the black file against them if might not do anything, but if you have Dr. Lovegood out it's guaranteed to be effective. — meta4 24 Jun 2016
What is the interaction of this with Current cards? Doesn't it allow two (or more) Current cards to be active at the same time? — nokturniak 29 Sep 2016
I'll answer my own question: Currents are events, events are never installed so Dr Lovegood won't work with Currents. — nokturniak 29 Sep 2016
I just read this review, and I'm not sure I agree with the fact that you can prevent other "When your turn begins" effects from occuring by blanking the card. I was under the impression that all effects afire at the same time (When your turn begins) and that you just choose the order in which they execute. Am I mistaken ? — lynesth 16 Jul 2017
Nevermind what I just asked. The rules clearly state that it would work. I was just under the impresssion it could not because of The Supplier FAQ. — lynesth 16 Jul 2017

More importantly with The Source, it also does not self-trash when you steal an agenda (without paying the $3 tax)