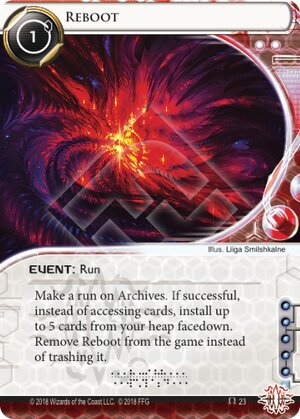 Run Archives. If successful, instead of breaching Archives, install up to 5 cards from your heap facedown.

Remove this event from the game.

I LIVE AGAIN
Illustrated by Liiga Smilshkalne
Decklists with this card

I don't play Apex to win, I play Apex for the weirdness. In that vein, a massively important flavour note: the Baudot code on Reboot says "I LIVE AGAIN". Rather more positive than the Baudot code messages on Apocalypse and Harbinger.

I've been tinkering with an Apex deck for quite some time, to some effect, and one of the biggest challenges aside from assembling combo pieces was sustaining in the endgame. I blow through my deck really quickly to pick up everything I need, but the endgame gets really stagnant, and if your key breakers end up in the bin, it's often difficult to recover.

Reboot looks pretty simple - it's a Retrieval Run, but instead of one program face-up, it's five face-down. This has some obvious interactions with:

Previously, Aesop Apex had no decent way of getting bin stuff back en masse, so this is a big deal for that archetype in particular.

I don't know of any way to get face-down events back to your hand on the Runner side, but there could be applications there.

It does count as a run on Archives, so there's some slight synergy with Apocalypse - with an Assimilator in hand you can bring some of your trash back, nuke the board and start setting up next turn.

You can even throw out a couple of these in a turn to get a whole bunch of burst installs... but be really careful of Death and Taxes.

Overall it's a cheap card that has wide applications within Apex.

(Reign and Reverie era)
ladybunne 91
Apex can't install non-virtual resources. So, no pawnin' with Aesop there. It might potentially enable Chop-Bot as a semi-reliable draw engine, so... — H0tl1ne 6 Jul 2018
As Reboot installs cards face-down, you could use the card to install non-virtual resources face-down and then Assimilate them up. — BlackCherries 6 Jul 2018
I don't know what to say. What a sick, sick thing. — H0tl1ne 6 Jul 2018