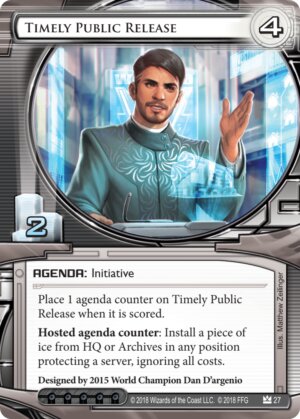 Hosted agenda counter: Install 1 piece of ice from HQ or Archives in any position protecting a server, ignoring all costs.

This agenda is very nice, but require some strategy around it.

First, you need a pile of credits (6 and more) to threaten the usage of a nasty ice.

Second, you need nasty ice in HQ or Archive. So this work really well in glacier deck. But can work also in asset spam deck, since you can pop a surprise any time.

Lets face it, if the corp is able to score this agenda early enough, instead of installing its most powerful ice, the corp can just trash it and keep the credits. Since the corp can pop that ice in place at the most inopportune moment.

Weyland has the best ices for this strategy. A Border Control could be used to give an End The Run (ETR). When the runner comes back, you can bring back the Border Control, cost the runner additionnal credits and again, give and ETR. This make Timely Public Release (TPR) act like a Nisei MK II, but costing more creds.

For the truly rich, pushing a Tyr, Chiyashi or Hydra can be devastating. This can be part of a kill package against the runner. You just need the econ for it.

Another ice could be Surveyor, crashing the calculation of the runner for passing the ices of the remote. This effect is absolutely game changing.

This agenda reward corp who use a strong economic gameplay. It is not the biggest surprise, especially if the ice was in Archive, where the runner can see which ice could be pushed. But it will give a headache to runner, making runners more careful, this making the runners slower. And if the runner is not careful, push the ice right in their face and see the horror creep up in their eyes when they realize they did a big miscalculation.

This agenda is pretty niche. But the fun in this game is to exploit the edge cases. And surprise the audience. Now, if only I could figure out the link between the beautiful art and the name, it would be even better.

4-2 agendas have historically needed to be "the shit" to be considered playable. Unfortunately, I don't think this card is quite there in terms of power.

That is not to say this card is bad. First and foremost, it is incredibly versatile. Placing ice in any position on any server is not an effect I think we have seen before. It allows for some really cool tricks with positional ice and installs from both archives or your hand. At worst it saves you some credits from installing at the outermost position of a big server, which is still valueable.

It being a one time thing is what keeps it down imo. I think if it received 2 counters on a score, it would definitely be playable in glacier. You probably don't play something like Bifrost Array just to get 1 more counter on this. Maybe if you combine it with other 'when scored' agendas? But now we might be going into jank territory.

(NAPD Multiplayer era)
Cpt_nice 1281
It's important to note that this is a paid ability that can be used at any time, even during a run. So if the runner approaches the outermost ICE of a server you can install a piece of ICE form archives directly behind it to strengthen the server on demand and mess with the runners expected run cost. — Krams 4 Oct 2018
In Titan with Border Control, it's a Nisei MK2 with 2 counters, with Project Atlas in faction. — LeePo 10 Oct 2018
I think, but I'm not 100% sure, that you cannot use this ability on a server with 0 ice to force the runner to encounter a new piece of ice when running it. Might be important to note. Basically because when the runner initiates a run, if there is no ice protecting the server they go straight to step for of the run which is after all ice. — miaxari 24 Nov 2018