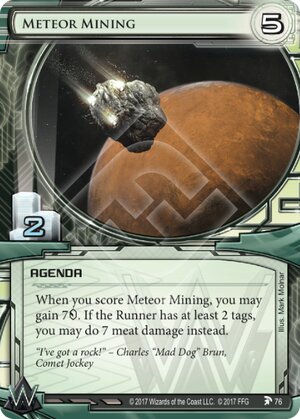 When you score Meteor Mining, you may gain 7credit. If the Runner has at least 2 tags, you may do 7 meat damage instead.

For those, who don't already know : take a look here and here.

I think i got it.

Murders the runner in the face when they thought they were safe because they trashed your BOOM!

Even if it doesn't finish the job, you still got 2 points

Nets you 2 if they aren't tagged, useful because the credit sink for scoring a 5/2 often leaves Corps at a disadvantage

You are taking an asteroid and throwing it at people

Can be stolen prematurely

damage can be negated with proper protection

Overall I think this is a hilarious agenda. Probably best if you can Fast Advance it. You also want your deck to be built around it, as 5/2s are terrible if you don't fully take advantage of their abilities

(Blood and Water era)
Handsome Jack 1602
It is hilarious, yes. Sadly, you will also never see it used, because if you could pull out the kill effect, you could just boom them, and if you are scoring without tags, you are coming 2c ahead through scoring a 5/2, which is just terrible. — Gargulec 24 Jun 2017
I think it would be mediocre as a 4/2 or 5/3. But as a 5/2? I just fail to see the value of this card... — Krams 26 Jun 2017
I'm a newer player but it seems like the advantage is first in the fact you get a Boom! out of something you were already doing (scoring), without clicking and you can do it again later with 24/7 news cycle. in other words the value is that you can do silly agenda stuff to it. Does that make it worth it? I couldn't say. — MechaniCat 11 Jul 2017
The problem is that Weyland has a very hard time landing two tags. It will be even harder when midseason rotates... Perhaps this could work with a Zealous Judge shenanigan...? — Frogblast 13 Jul 2017