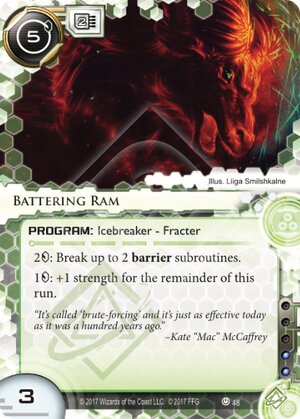 1credit: +1 strength for the remainder of this run.

"It's called 'brute-forcing' and it's just as effective today as it was a hundred years ago." -Kate "Mac" McCaffrey
Illustrated by Liiga Smilshkalne
Decklists with this card

With the onset of a decent complement of cloud breakers, Battering Ram deserves new consideration for Shapers with two or more . Kate and Nasir can make great use of the ram in consort with GS Shrike M2, allowing the MU of one to offset the other.

In terms of out-of-context efficiency, Battering Ram has an advantage over current darling Corroder against Eli 1.0 and Hadrian's Wall, falls short to Corroder against Wraparound, Ice Wall, and Spiderweb, and ties Corroder against barriers with odd-numbered subroutines but a strength higher than two.

Battering Ram also keeps its strength for the remainder of the run, so stacking two barriers on a server becomes a logistical nightmare for the Corp. The common strategy of double Eli becomes relatively inexpensive with the ram.

Battering Ram's interaction with Nasir deserves exceptional consideration. Because there is a paid ability window after the corp rezzes ice but before Nasir loses all of his credits, he can pump the breaker's strength before losing money and THEN gain money from the encounter.

(The Universe of Tomorrow era)
psi_lifeup 200
4

Battering Ram has not seen a ton of use. Though it is costed allright in breaking barriers (one subroutine barriers become slightly inefficient) the two MU cost is what holds it back. While it’s ability to retain its strength for the remainder of the run can be useful, that requires the corp to be stacking barriers. Relying on the corp to set things up to make it easy on the runner is a strategy that is not going to see a lot of success.

It might be interesting to see Battering Ram and the other permanent strength breakers in combination with Escher, which would allow the runner to dictate the ICE placement and make it much cheaper to get into servers than the corp would wish. The two MU cost of Battering Ram makes it difficult to see even this fringe strategy through, and is what keeps Battering Ram from making a huge splash. It is interesting to note that except for a few pieces of ICE, Battering Ram is as efficient, if not a credit better, than Corroder. Just that two MU still makes it so hard to use.

(Breaker Bay era)
lynkfox 365
And the inital tempo hit of 5 credits for only +1 strength compared to Corroder — UminWolf 18 May 2015
I run it as a 1-of in my PPvP Kate - with Cerberus - if they stack barriers on R&D, it become gold dust - that happens almost every game — Nerdfighter 24 Sep 2015