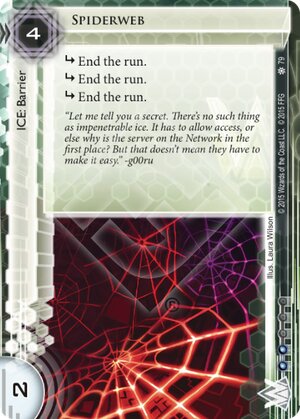 "Let me tell you a secret. There's no such thing as impenetrable ice. It has to allow access, or else why is the server on the Network in the first place? But that doesn't mean they have to make it easy." -g00ru
Illustrated by Laura Wilson
Decklists with this card

Three months after its release, Spiderweb has found a home in nearly every Weyland deck and will keep its slot in the foreseeable future. It has contributed to the age-old discussion of Subs > STR, knocking a taxing blow to popular barrier breaker Cerberus "Lady" H1 as well as the powerful Faust, giving the faction their slight edge in the Barrier market yet again. Pricing identically to Bastion for Corroder, Spiderweb has an additional benefit of not clogging up the 4 STR range of ICE, to which Weyland has few interesting options (Changeling, Wendigo).

Weyland can now front a very versatile Barrier suite with Spiderweb at the core, flexing towards the cheaper rushy Ice Wall or Meru Mati, to the overall taxing Fire Wall or annoying Changeling, all while keeping Atman resilience and decent Faust tax.

On the horizon of this review's writing, Spiderweb will also play a pivotal role is defending against Adam and his Always Be Running, taxing 4c to GS Sherman M3, and costing 3 cards to Apex: Invasive Predator.

Spiderweb is somewhat weak to Grimoire + Parasite, and hilariously, Breach, as well as rampant face checkers, as 4c is not cheap. Consider including some ICE to burn reckless players.

(The Universe of Tomorrow era)
hi_impact 1720
Let's not forget the Quetzels who haven't found their E3 Feedback Implants yet! — Bigguyforyou518 5 Oct 2015
3

As a hard "End the Run" piece of ice with a rez cost of 4, the immediate point of comparison for Spiderweb is Bastion, and the core difference is the "strength vs. subs" debate.

The first, most obvious point, is that to a runner using Corroder or Eater there is no difference whatsoever between these. Either you pay 2 for strength and 1 for the sub, or you pay 3 for the subs.

So lets look at other icebreakers instead. When is Spiderweb better? Clearly, three subroutines is hugely taxing for any 2/sub icebreaker (Sage, Darwin, and Knight being the most popular). Faust will cost three cards instead of two. The incredibly common "Atman at 4" will not be able to touch Spiderweb at all. And a Spiderweb stops Quetzal cold when Bastion lets her through.

All this, though, pales when compared to the effect on the ubiquitous "Lady"; instead of Lady breaking Bastion for 1 and one counter each time, instead it's going to cost the runner two tokens, meaning they can only get through Spiderweb twice before they need their recursion. Similarly, Spiderweb burns through Overmind at triple the rate Bastion does, albeit with a 2 cheaper break cost.

There is a cost to being a Lady-killer, unfortunately. A significant cost, in the form of another immensely popular card. Parasite. At best, Spiderweb holds out two turns, and with Grimoire and Datasucker around it is extremely likely it wouldn't live even one. This is a huge deal for Blue Sun (which is arguably the most popular Weyland division). Even if Bastion only survives one turn, that's enough to pick it up and play it back down, saving the rez cost and trashing the virus in the process.

Personally, I think this vulnerability makes Spiderweb difficult to justify, especially at a cost of 2 influence. I would only really consider splashing it into a Midway Station Grid deck. Otherwise, save your influence, and just play Bastion or Wall of Static.

(The Underway era)
tiedyedvortex 4712
Eater doesn't cost the same as corroder. It's not an AI that breaks all subs — Mechanoise 7 Jul 2015
In the 2nd paragraph tiedyevortex is comparing the cost to break Bastion with Corroder/Eater to the cost to break Spiderweb with Corroder/Eater. Both Eater and Corroder start with 2 and have the same str and break per cred efficiency so they cost the same to deal with any ice. — drhems 7 Jul 2015
I think Blue Son's natural defense against Parasite means you can run it. They can't let it slow burn, and it has so many upsides that its probably worth it — TonyStellato 7 Jul 2015
For me, Spiderweb is something I'd consider as a replacement for Eli, especially in a Weyland deck. The 1 cost difference for Corroder is beaten by the combination of being immune to Atman 4 and the extra sub cost. Spiderweb sits in the "mid-cost Ice with multiple subs" space for me, rather than just the barrier space. It's more tokens for Lady, but less for Parasite. It's 3 vs 4 for corroder. I value the ability to tax counters higher than credits in the current meta, though. Kate will have the credits, but may not have the counters.... And 2 Spiderwebs eats Lady entirely, unlike 2 Eli. — Wookiee 7 Jul 2015
@Wookie, great points! I'd also add that Spiderweb is a flat gear-check whereas Eli can be clicked through (sometimes a benefit, though I'm not sure that comes into this specific discussion), and if you're looking at a Weyland deck it's an influence saving. Superior cyberwalls is also a nice boon to this (Yes, I know it's hardly played) — zithith 8 Jul 2015