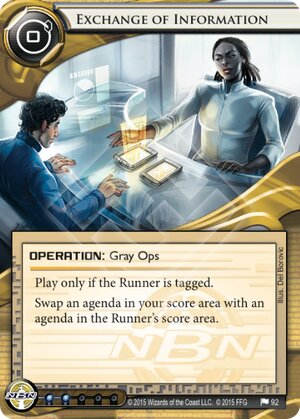 Illustrated by Del Borovic
Decklists with this card

This card is bonkers, right? Breaking News is easy to score with a click leftover (either never-advanced or with AstroScript Pilot Program / SanSan City Grid / Early Premiere / Political Dealings), and-- would you look at that-- gives the runner tags.

This feels like a really strong way to round out NBN tag & bag decks: if the runner can avoid being killed (with some combination of Plascrete Carapace, Paparazzi + Wireless Net Pavilion + Fall Guy, Sports Hopper or whatever), they can still be made to pay very dearly for taking a tag.

Global Food Initiative is an obvious target (low risk, high reward and point swing). Other popular targets of Media Blitz apply here as well: in-faction you have Restructured Datapool (combine with Aryabhata Tech for Maximum Hijinx) and maybe Puppet Master. Out-of-faction you have Mandatory Upgrades and Government Takeover if you are feeling dangerous.

I feel like if this becomes a thing (and I'm pretty sure it will), we'll see a lot more New Angeles City Hall around.

(Fear the Masses era)
internet_potato 961
I already felt Breaking News to be the second best agenda, not just in NBN but in the entire game. This card, along with several other recently released cards make it absolutely bonkers. — quailman2101 27 Jun 2016
recent ruling/clarification from the stimhack forums: http://forum.stimhack.com/t/media-blitz-and-exchange-of-information-interaction-answer/7664/1 — internet_potato 1 Jul 2016
(hit post too soon) recent ruling discussed on the stimhack forums makes this even more bananas. media blitz remains in effect when you EOI an agenda back. So you can stack puppet master, utopia fragment, or anything else that has a continuous effect by media blitzing it and then stealing it back with EOI. http://forum.stimhack.com/t/media-blitz-and-exchange-of-information-interaction-answer/7664/1 — internet_potato 1 Jul 2016
4

Very excited for this card. Here's how I foresee this being used:

If you want to be extra rude, have 15 Minutes scored already and swap the 5/3 for that, then shuffle it back into your deck on your next turn.

Can also use SEA Source if you're rich.

This is very strong tag punishment, even against runner decks that have ways to deal with killshots.

Also can't wait for the inevitable back-and-forth vs. a Turntable deck.

(The Liberated Mind era)
timurleng 163
I was sitting browsing through the data pack and the thought of the 15 Minute shennanigans I could cause with this made me squee. — Hanohtep 28 May 2016
If you swap a Breaking News in the same turn you score it, does that mean the runner keeps the two tags after the turn ends? — drmastodon 31 May 2016
Yup. — skyrunner36 4 Jun 2016
Can i swap an Agenda for a trashed/stolen Victoria Jenkins? Does she then end up in my Score Area beeing in effect? — fungu 4 Jun 2016
Fairly certain that assets aren't considered to be active if she's in your scoring area. will be delighted if I'm wrong though! — StrafeMcgee 6 Jun 2016
Grotesque with "Government Takeover" — Hongkong Koma 8 Jun 2016
I recently got EOI'd for a round time loss when I was up 2-1. So, there's that. — NoSoup4you 18 Oct 2016
3

I really have a beef with this card. Flavor.

Agendas are projects that require time and investment of the Corp. This is represented by the Clicks and credits needed to Score. The bigger the Agenda, the more time and investment you need. The Corp just don't simply "acquire" all the needed equipment, infrastructure and staff needed to run a Global Food Initiative just because the Corp invested time and money tracking down the runner (Breaking News), and coerce him into trading the GFI plans over.

This isn't the first card that disregards "Flavor" in favour of mechanics. There are a lot. I can forgive them most of the time, because I can usually throw some loose logic to rationalise them. But there is something about this one that really sticks in my craw.

(Escalation era)
bobman 4
Maybe the idea is that the process includes setting things up so the runner CAN'T steal the plans again (a sensible safeguard), so completing the agenda is a foregone conclusion. — LordRandomness 31 Oct 2016
I think it comes back to the fogginess of "stealing". The runner has something that is holding up an older agenda. They give it back in exchange for the runner begging off some new project. Or vice versa. — Waltzard 1 Nov 2016
I see your point. Nevertheless I can imagine that this card is around gashlight and manipulation techniques. — valerian32 1 Nov 2016
Last comen lost = ( I see your point, but I imagine that here we're dealing with Victoria Jenkins herself. The conversation could be some ambush where she manipulates the runner to make mistakes where the runner thinks that he/she/apex can get their goal in exchange or something that also took quite money to get but they're fooled. — valerian32 1 Nov 2016
But if the Runner comes with their Turntable, Victoria and her executive start partying like mad. — Lupus Yonderboi 1 Nov 2016
I like LordRandomness' suggestion. It offer a plausible account of how agenda total were earned. It will not, however, explain how agenda with triggered abilities still work (since they haven't really advanced them yet). Valerian's idea also has merit in explaining how a swapped agent has been pre-advanced, but it doesn't explain the discrepancy in advancement cost of what was traded or why the sacrificed agents still takes effect in the first place. — bobman 1 Nov 2016