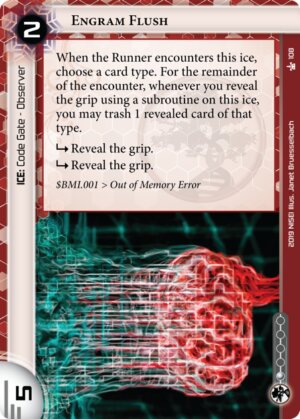 When the Runner encounters this ice, choose a card type. For the remainder of this encounter, whenever you reveal the grip with a subroutine on this ice, you may trash 1 revealed card of that type.

$BMI.001 > Out of Memory Error
Illustrated by Janet Bruesselbach
Decklists with this card

Engram Flush, like Slot Machine, is a cheap to rez but taxing to break code gate with unassuming subroutines. Slot Machine is great, and I'll compare Engram Flush to it to get some sense of how good this new code gate is. Incidentally, both reveal runner cards, and thus can give Hyoubu Institute a credit.

2 for a strength 5 code gate with two subroutines is a fantastic deal if the runner breaks those subroutines. If they don't, they're liable to lose a card or two provided you have a read or knowledge on what they're holding, which you're likely to have in Hyoubu or Chronos Protocol. You can hunt down any I've Had Worse the runner might be holding for your damaging ice by naming Event, and in general the ability to pluck chosen cards out of the runner's grip is already what Chronos Protocol decks are going for.

Both Engram Flush and Slot Machine are somewhat liable to misfire and won't always be as powerful. In Slot Machine's case, it depends on the top cards of the runner's stack, but at minimum you will cost the runner 3 even if their stack is empty or they blank its encounter effect. Engram Flush on the other hand can be walked through with an empty grip, although that's probably a bad idea against Jinteki. Engram Flush will also do almost nothing against Hunting Grounds or if you just name the wrong type with the encounter effect, which the runner will know before they choose to break or not.

I think you probably have to really be taking advantage having existing knowledge of the runner's grip to make Engram Flush good enough. It's less reliable than Slot Machine, although it is a whole credit cheaper which is a big deal at such a low cost. My prediction is that this card is good enough for Hyoubu Institute and Chronos Protocol, and maybe Harishchandra Ent. at a push, but its going to be a tough sell for any other corp.

One of the most powerful ice ever printed. Engram Flush almost always hits for 4+ credits or 1-2 cards of the corp's choice, which is enormous and consistent value for a 2-cost ice. Along with Slot Machine, it was in the elite tier of code gates which fares well against both Engolo and Amina. It was removed from standard play because its numbers are crazy for a 2-cost ice. Even if they have a Hunting Grounds, it only affects 1 Engram Flush once per turn, and even then they still reveal their hand.

EF wasn't QUITE as universally useful as Slot Machine or Gold Farmer, but it was an extremely potent import at 1 influence, assuming your enemy plays better with cards. In-faction, it pairs savagely with the 3 Obokatas that you were already running and any net damage cards you might be running. When this ice was legal, it was an almost guaranteed 3-of in any Jinteki deck with 10+ ice, and almost half of corp decks ran 2-3 copies of it during Salvaged Memories.

Tactics: deploy early, rez early. Unless you have reason to suspect otherwise, choosing Event is usually the best option (or close). Most game-winning cards are events, and they're the most likely to be held in reserve for a killer moment.