For the first net damage the Runner suffers each turn, you may look at the Runner's grip and select the card that is trashed. 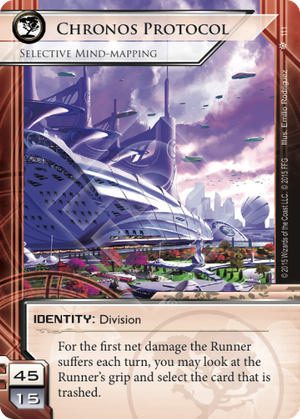 This ID is very interesting to me and I think needs a lot more testing, and could possibly explode in power if given the right tools. The biggest advantage of this identity is that it terrifies the runner from wanting to run until most of their rig is out. Common knowledge dictates that the way to play around PE type decks is to not run until most of the cards in your hand are tolerable to lose. PE can poke at your by scoring a few things themselves, but the damage is random and PE tends to run a lot of easy-to-score 1 point agendas to shave you as much as possible. The only big agenda they tend to use is #the future perfect, so when they try to score it early you can usually wager if the damage risk is worth 3 points, which it usually is. This means that handing some early tempo to PE so you can safely set up is annoying, but usually not that bad, since they might get 1 or 2 points/damage.

Chrono Trigger here ramps that initial pressure up immensely, and when used correctly, this ID should theoretically almost guarantee you an early game lead. Almost all the cards that proc the ID can only be used if the runner runs (Neural EMP, ice, Shock!. And since even 1 or 2 damage early on means the runner WILL lose the most valuable cards in their hand and lose a buttload of tempo, the smart runner will (and should) essentially concede the early game to the corp so that they can set up their rig/econ in peace. In PE, this means getting 1 or 2 points. In a Chrono deck with some good rush potential, this could mean the corp getting 3-4 agenda points and setting up their own economy practically uncontested. I shouldn't have to tell you that being halfway to victory before the runner even starts running is a big, fat, sweaty advantage so infuriating and pressure-heavy it might as well be a Yolo t-shirt in a vice.

However, like all damage decks, it only hits the hand, and like most rush decks, it falls off late game when your gear checks don't work anymore. What this ID needs is the ability to trash programs regularly and set the runner back to square one. While there are several cards that attack the runners rig, I think 2 cards in particular in the new set are going to work very well in Chrono. The upcoming Salem's Hospitality, and the new Kala Ghoda Real TV. Hear me out on this:

Salem - Enables you to trash the cards you want WITHOUT the runner having to run. This shuts off part of the counterplay to the the ID. Land even one damage, and you know what to name for salem, essentially doubling your Chrono procs. Proper meta knowledge and game skill also make this card terrifying in the hands of an expert. Also, I can't help but think of all the times you could use it turn one and just name Sure Gamble. The look on the runner's face....

Kala TV - While most people glossed over this card as a "good but not good enough" type of card, I think it has some real synergy with Chronos and Salem. By dropping this early, you know almost everything the runner is drawing, meaning you know what to name for salem, thereby getting chrono procs without doing damage at all. Plus, while ChroPro has massive control over your hand and you can add trash effects to gain (possible) control over the field, Kala TV extends your control to a new area: their deck. By smacking what the runner wants out of their hand, being able to trash things off their field and making sure they never even GET the vital tempo-reviving draws they need, you are effectively controlling literally every aspect of the runners game. Plus Salem is an alliance card, and 3 J-How plus 3 KTV is 6 influence and makes your 3 Salem witch-hunts TOTALLY INFLUENCE FREE.

Again, this is all theoretical, but I find it hard to deny the potential power of this deck. In the hands of an experienced player, this shell could be the single most gut-wrenchingly scary ID to face in the game. The soul-crushing surgical dissection of your deck and demoralization of never having what you want, never keeping what you want and never getting what you want, this could be one of those decks that loses you friends.

(Kala Ghoda era)
ChairmanHiro 442
Targeted marketing is a popular NBN current out of this ID, which also benefits from KTV and the hand info from the ID. — bubbathegoat 20 Feb 2016
I'm inclined to agree, been thinking about an all in control deck using museum to recur shutdowns, emps and blacklist, backed by the cards you mention. — whirrun 20 Feb 2016
ERMAHGERD. DUDE. GUYS. I just realized. Housekeeping. In this ID. *squeeeeeeeee* 3 influence is a heavy cost, yes, but imagine dropping this early. The runner can't run because Chrono, the runner can't sit back and set up because housekeeping. OMG. A mind-bending rock-and-a-hard-place setup that can be achived crazy early in the game. I *MUST* try this. — ChairmanHiro 21 Feb 2016
9

This ID is like Jinteki: Personal Evolution on steroids. I'm terrified of being a runner when this card comes out. Here's why.

As any one who's ever piloted or played against a "Thousand-Cuts Blacktree" deck, the real threat isn't the flatline. Sure, the double-Ronin kill is a possibility, as is the possibility of a click-three Komainu or Psychic Field followed by double Neural EMP, so you have to be wary of those things, but that's not the scary part.

No, the scary part of Blacktree is that if you run at the wrong time, you could lose essential cards that you're keeping in your grip. If you are holding back on dropping that Gordian Blade until you see a code gate get rezzed, you might hit a Shock! or Snare! and lose it. If you're waiting for the opportune moment to make a Notoriety or Quest Completed run, you might lose that card before the opportunity presents itself.

Chronos Protocol takes this possibility and makes it an inevitability. Because it's really, really easy to do one point of net damage at a time. And when that damage happens, you are guaranteed to lose the most valuable card in your hand.

House of Knives becomes "House of ohgodwhy" as you strip away everything the runner knows and loves..three times. Neural EMP isn't just for flatlines anymore. Put one Shock! in Archives and laugh as you pick their brain apart. Cortex Lock absolutely must be broken every time, until they hit full MU. Fetal AI is even more frustrating than it already was. Hokusai Grid coupled with the upcoming Ancestral Imager becomes the ultimate rock-and-a-hard-place scenario. And so on.

I expect to lose against this ID many times in the next year. Maybe this is the time to bring back Net Shield, or try out that new Synthetic Blood.

(The Valley era)
tiedyedvortex 4544
Probably the best (if not the only) corp control ID in the game. — Kroen 16 Apr 2015
This is the ID that'll see net damage protection hit the big time. — lolpaca 16 Apr 2015
This makes Swordsman's "consolation prize" subroutine (1 net damage) worth the rez cost of the entire ICE. — Bigguyforyou518 16 Apr 2015
I have to reiterate even though everyone know it that this ID makes Neural EMP an unholy abominion straight from the depths of Tartarus, even more so than Sneakdoor in Gabe. — Kroen 16 Apr 2015
That being said, if this ID gets popular and people start playing Net Shield (tutorable in shaper and just 1 influence elsewhere) then this will be hit. Hard. Having to do 2 net damage a turn to trigger the ID isn't the easiest thing. During the runner's turn sure, you have Shocks and Hokusai and sources that deal 2+ damage on their own. During your turn, however, unless you double Neural then you're out of luck. — Kroen 16 Apr 2015
Great review. You forgot one more crazy card with this ID: Hostile Infrastructure! — Ber 16 Apr 2015
@Kroen : I think this will be ruled as Tori Hanzö. If you prevent the first net damage of the turn, the avility won't fire. If the ID becomes popular you will need a way to deal with Net Shield — Greek Geek 17 Apr 2015
The consensus is that it will fire. It says "the first net damage the runner SUFFERS". If you prevent the first net damage, then that's not the first net damage the runner suffered. Same goes if prevent the second or the third etc. It doesn't matter how much net damage you prevent, as long as you don't prevent them all then the first net damage not prevented (e.g. suffered) would tirgger the ID. — Kroen 17 Apr 2015
Tori Hanzō's wording is different. It says "The first time you would do any amount of net damage" and as we know, "any amount" can be 0. — Kroen 17 Apr 2015
Ignore the last post. The reason Tori is different is because preventing net damage doesn't prevent the corp from DOING net damage, but it does prevent the Runner from SUFFERING net damage. — Kroen 17 Apr 2015
Blacklist is only 1 Influence. Auto-include in any Chronos Protocol deck, I think. — Wookiee 17 Apr 2015
I think the ID is way overrated! When facing any Jinteki damage build, you always have to assume that the random net damage will take your best card. Considering that you just have to make sure that your precious cards are save, which means played or installed. When the time comes and the card is released I am pretty sure players will return to PE, because more damage will always be superior to taking the best card considering a scenario where the runner will play around loosing his precious anyway. I have yet played a game against Jinteki PE / damage build in which I did not make sure that all my cards were affordable to loose. I mean how often do you risk loosing your best card to random damage anyway? — eulennatzer 18 Apr 2015
I have to agree with eulennatzer that it's probably going to be the case that PE is still actually stronger than this ID (unless very combo-heavy runners become common). Although Neural EMP is much stronger in this ID, don't underestimate the extra net damage that PE does; it's much easier to do a net damage a turn when the agendas do it too... — Comfect 18 Apr 2015
@eulennatzer has a very good point. In fact, eveen Neural emp is not such a big threat if the runner is careful. If you have cards in hand you MUST keep, don't run! That disables the EMP. If you run, it means your cards are expendable, which is always the assumption when running vs killteki. — licoricemaniac 4 Sep 2015
The clearest advantage that Chronos offers over PE is seeing their entire grip every time. The information war becomes heavily lopsided. — EnderA 1 Oct 2015