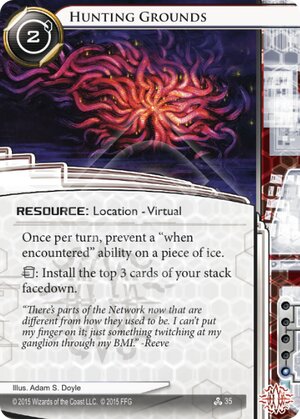 Once per turn, prevent a "when encountered" ability on a piece of ice.

trash: Install the top 3 cards of your stack facedown.

"There's parts of the Network now that are different from how they used to be. I can't put my finger on it; just something twitching at my ganglion through my BMI." -Reeve
Illustrated by Adam S. Doyle
Decklists with this card

This card wins my "I didn't think it would be as good as it is" award.

I was seriously underwhelmed when this card was spoiled, but having played with it a bit, I find myself really liking it a lot.

It punishes NBN a lot. (Which fits, since it came out in NBN's deluxe expansion.) Tollbooth is a fantastic ice specifically because it can be counted on to generally cost the runner around 7 to break, even with a good breaker. Dropping that to 4 is huge. And not just Toll Booth! Data Raven loses a lot of its sting. Pop-up Window suddenly stops making money. Turnpike no longer has its tax.

But even outside of NBN, all of the grail ice is stuck at one subroutine. Quicksand can't grow. And Komainu, much like Troll both end up effectively blank.

The active ability is less likely to be useful to runners who aren't using Apex's tools, although it's a good alternate use for anyone running Aesop's Pawnshop or Chop Bot 3000, if the corp doesn't seem to have any Toll Booths.

(Data and Destiny era)
Bwob 513
Bwob is a correct human (or, possibly, Apex). Put one of these in your runner deck. — Waltzard 9 Jan 2016
Add Grail ICE and Quicksand to the list. — Dagguh 19 Mar 2016
Does this stop [Weyland Consortium: Builder of Nations](/en/card/11038)? — rezwits 3 Feb 2017
It does not, as that is an ID ablity, not ice. — Cpt_nice 28 Sep 2017
Also importantly, Builder of Nations no longer has a "when encountered" ability since it was errataed. — Sanjay 30 Nov 2017
I don’t understand the trash ability. How do I rezz stuff as a runner? Just pay the card cost? — Vortilion 29 May 2018
Like the last sentence in the review describes, it's meant to be used with Apex's tools that require trashing installed cards, but can be just as useful with Aesop's Pawnshop or Chop Bot 3000. Currently, the only card that flips cards up is Assimilator. — BlackCherries 29 May 2018
Thank you BlackCherries! — Vortilion 29 May 2018