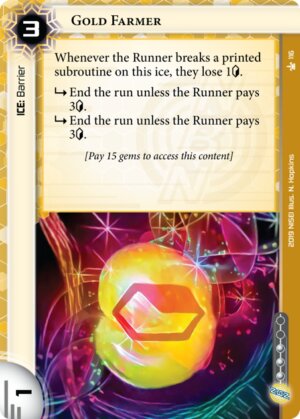 When the Runner breaks a printed subroutine on this ice, they lose 1credit.

subroutine End the run unless the Runner pays 3credit.

subroutine End the run unless the Runner pays 3credit.

This is the best end-the-run ice in the game*. It ALWAYS costs more to break than it does to rez. For almost every runner, this costs 4 to break with a breaker or 6 with no breaker, either of which are exceptionally high for a 3-cost ETR. In GameNET it reliably causes a 6-credit swing if they have a breaker, one of the most efficient ices in the game. Other ice that stand out on efficiency (e.g. Engram Flush, Slot Machine, Aiki, and Mausolus) usually lack end-the-run abilities or have gut-wrenching conditions (Data Ward is the most efficient ice in the game, but only if they're tagged).

Gold Farmer was removed from Standard because it is crazy-powerful in every matchup, on any server, against every possible configuration of breakers and breaker-alternatives. Among MANY other key applications, it is by far the most reliable setup piece for a turn 1 Daily Quest or Rashida install. (No breaker works well, paying through is a huge setback, and even Boomerang is no good). In GameNet, a single Gold Farmer takes Diversion of Funds from 2 clicks for a 9-credit swing to 2 clicks for a 3-credit swing. Ghastly.

Liabilities: none. It only ends the run, true, but at a cost of 3 it's best-in-class for reliably protecting assets and critical servers. This ice was concurrent with high-value, low-cost assets like Daily Quest and Wall To Wall and you absolutely could afford to spend 3 on a gearcheck to raise the cost of killing them. (Note: in Eternal, Parasite deals with it relatively easily, but losing a 3-cost ice to a Parasite is not the end of the world).

Gold Farmer is so rawly powerful that it has no adequate counterplay, but more than that, it's so powerful it's hard to imagine what counterplay COULD be printed, without gutting ice in general. If Gold Farmer's ability fires, it is virtually guaranteed to cause a 4-credit swing, which is an efficiency win for the corp even outside of GameNet. Even if the runner have a specialized breaker like Cleaver, which can break 2 subroutines for 1 credit, a 3-5 credit swing is still excellent for a 3-cost ice.

*Border Control has a phenomenal ability, but I'd give the slight edge to Gold Farmer in value over time. Gold Farmer is an A+ ice in every matchup, in every phase of the game.

I would like clarification on the text of this card. If an icebreaker would break 2 subroutines at once, does "When the Runner breaks a printed subroutine on this ice, they lose 1credit" fire one time or two times?

It fires twice even if you used something like Tycoon to break 2 subroutines at once.

Remember the #Hippo/Cutlery/#Ankusa exception too - the moment you break the last sub with one of those, you trash the ice, which prevents the effect from firing.

On Paperclip it also fires twice. If you Hippo it with Paperclip, it doesn't fire at all.