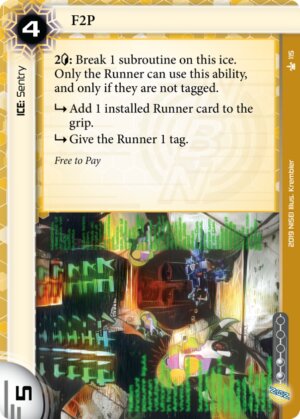 2credit: Break 1 subroutine on this ice. Only the Runner can use this ability, and only if they are not tagged.

subroutine Give the Runner 1 tag.

Free to Pay
Illustrated by Krembler
Decklists with this card

In terms of numbers, F2P is incredibly solid. 4 to rez, 5 strength is nearly unheard of in sentries. And bouncing any runner card is a potentially devastating effect. And a nice tag to boot. Sure, it won't stop a determined runner, but like a lot of NBN ice, it isn't meant to. It is very taxing, costing 4 to pay through or break with the godtier killer Bukhgalter, and very often more than that.

Mostly, this is a neat toy for Acme. There, this sentry will always be "live", as long as it remains the outermost ice of a server. Of you could park a Data Raven in front of it as the server gets bigger. I expect this to become a staple in said corp, and we might also see it in other yellow decks once in a while.

Also, lovely flavor. A play on the videogame concept 'free to play' (see GameNET, who also gain 2 bucks if you use F2P's ability instead of breaking its subs) and how you can interract with this ice without programs. For a price.

My RAW says yes you can pay twice to break twice. There is no text that says "use only once per turn" like there is on other cards where that is the intent.

The abilities with the Cost:Efect format can all be used as many times as you want unless stated otherwise, if you can pay the cost.