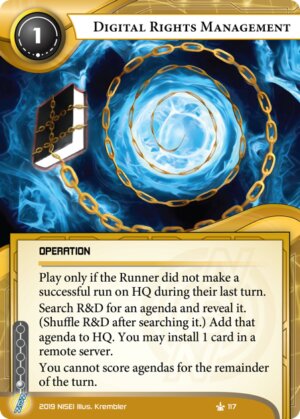 Play only if the Runner did not make a successful run on HQ during their last turn.

Search R&D for an agenda and reveal it. (Shuffle R&D after searching it.) Add that agenda to HQ. You may install 1 card from HQ in the root of a remote server.

You cannot score agendas for the remainder of the turn.

Basically Fast Track in yellow. It costs a credit and 1 influence if you're not NBN but it makes up for that by giving you an optional clickless install in return.

Not being able to score the agenda on the same turn you play this card isn't much of a drawback. It just means this card isn't meant for fast-advance. Rather, this card is amazing for glacier corps with 5/3's. Being able to search the perfect agenda and then immediately IAA it puts a ton of pressure on the runner. Better yet, because the card you install doesn't have to be the one you fetched from R&D, you could install a NGO or Junebug instead and drag the runner through an expensive remote.

The "no hq run" condition is a minor setback but this card will still be playable most of the time when the corp is set up. It is a bit early to say, but I think Digital Rights Management will be an incredibly potent tool for a ton of different decks. Titan and other rush decks will still prefer Fast Track, but DRM will definitely see play in Azmari, Jinteki glacier and Weyland decks running 5/3's. SSO in particular benefits a lot from this card, as finding an agenda early is incredibly important for their set-up.

Btw, fun fact, in a cyberpunk game about hacking, this is the first card to have 'digital' in its name (not counting Kate's full name). Only took 7 years.