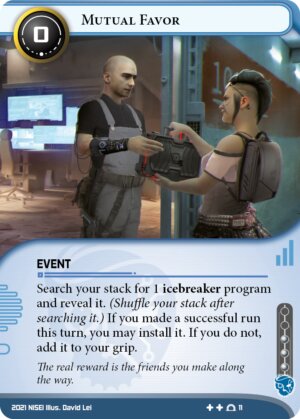 Search your stack for 1 icebreaker program and reveal it. (Shuffle your stack after searching it.) If you made a successful run this turn, you may install it. If you do not, add it to your grip.

The real reward is the friends you make along the way.
Illustrated by David Lei
Decklists with this card

I have opinions about this card. Of all the cards in System Gateway, I don't know why this one sticks out to me: but it does, so here goes.

At worst, Mutual Favor is a straightforward upgrade on Special Order - costing 1 less credit, with 0 downside.

Special Order was a staple 1x in the majority of criminal decks - filling the slot of "2nd Paperclip" for reg decks playing 2 x of each breaker, giving flexibility to Aumakua lists to find the breaker they need to stop being locked out of turtle counters, and helping Engolo lists find the only breaker they need to start landing Diversion of Funds. So, at worst, this is an easy upgrade.

But here's the wild part.

At best, if we've made a succesful run this turn, Mutual Favor is a better use of a slot than any redundant copy of any icebreaker - and in this situation it's actually preferable to draw Mutual Favor than the icebreaker we plan to install - because not only does Mutual Favor gives us the flexibility to install any icebreaker, it removes that icebreaker from the deck so we won't draw it later as a dead card.

I humbly propose Mutual Favor for consideration as the most understated card of System Gateway, and I invite you to try playing it as a 2x or 3x instead of any redundant copies of Bukhgalter, Amina or Aumakua.

Yeah, it's a little bonkers how much of a straight-upgrade this is compared to Special Order. It does technically cost one more influence comparatively, but then again probably only Criminals themselves are the only ones who ever used it, so not a big deal. I think the only runner out-of-faction that ever used Special Order was Sunny... who... well, poor Sunny weeps for many reasons. This will just be added to the list.

I concur - nothing more to add

The only thing necessary then is to play some sort of recursion, as losing your breakers through any means spells trouble. Simulchip is good but costs influence (and potentially other programs). I have toyed around with this concept myself to decent success in Startup, but the issues with this I have also learned through it.

As a followup to the above comments: I've been playing rigshooter recently because I think it's good against the top Runner decks, and was playing against one of Kikai's decks (but piloted by a different player, not by Kikai). It didn't go well for the Runner at all, and I'd constructed up a hard lock (with no icebreaking ability left) early enough that only 1 agenda point had shown up. Mutual Favor might be a great way to thin your deck, but sometimes those redundant breakers are really needed.