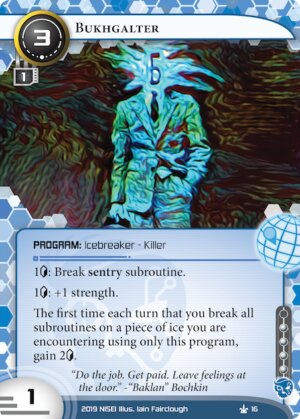 The first time each turn this program fully breaks a piece of ice, gain 2credit.

"Do the job. Get paid. Leave feelings at the door." -"Baklan" Bochkin
Illustrated by Iain Fairclough
Decklists with this card

NISEI rarely prints strict upgrades to previously-printed cards but that’s what Bukhgalter feels like to the now-rotated Garrote… wait a minute, haven’t I published this review before?

Jokes aside, the two criminal Killers have the exact same paid abilities that are so rare and elusive: "1: Break 1 sub" and 1: +1 strength". But that’s where the similarities end as Bukhgalter is 4 cheaper, 1 less , and pays you money for using it while Garrote gets 1 additional strength. I think the winner between the two is obvious.

Now I can already hear you saying, “Cherries, this card is OP!” Let’s take a look:

MKUltra is better vs:

Mongoose is better vs:

*Bukhgalter is better vs. these ice if it is the first piece of ice that it breaks all subs on

Ignoring the obvious offender Na’Not’K, that is not a lot of ice. Most of the ice listed above are also asterisk-marked. Does this comparison even matter though? At 4 influence, Shapers will gladly stick to their star pupil and Anarchs to theirs. But you best believe, Criminals now have their own Killer worthy of the icebreaker spotlight. If you’re running in blue, there is little reason to run anything else.

P.S. Thank you NISEI for a powerful blue card that is not under-influenced. I look forward to future sets!

(Downfall era)
BlackCherries 351
Definitely agree--it's nice to finally see the Killer faction actually get... well a good Killer. Anarch has always had Corroder and Shaper Gordian--Crims had... arguably Femme, but more often than not at 1 Inf it was just imported into other factions more often than actually being useful in Crim. Finally Crims own the "basic, all-around good killer" breaker. — Chezni 25 May 2019