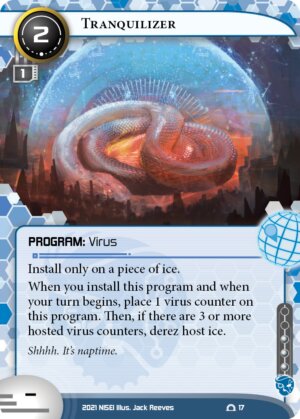 Install only on a piece of ice.

Shhhh. It's naptime.
Illustrated by Jack Reeves
Decklists with this card

At time of review, It’s yet to be seen how ubiquitous this card will become. But if my own (admittedly limited) testing is anything to go by, I’d say very. On a sufficiently expensive ICE, it’s essentially a blue Chisel. Who can afford to re-rez a Chiyashi every three turns?

There are some good counter-play options available to the Corp however, that I think will prevent this from becoming oppressive, as some have suggested.

The first and most obvious option is to simply overwrite the affected ICE, trashing the Tranquiliser in the process. Given that recursion isn’t Crim’s strong suit, there’s a good chance you won’t see it again if you do. However, I’d argue that unless the increased ICE install cost is really causing you grief, you’re better off just leaving the affected ICE unrezzed where it is. Chances are the (typically MU poor) Crim will need the MU sooner or later and will over-install it themselves.

Purging really isn’t a viable option given how quickly the virus counters accumulate. Even with something like Cyberdex Sandbox to soften the blow, losing a whole turn is just too much of a tempo loss to repeatedly sustain.

A couple of things to note that might not be immediately obvious to new (or returning) players:

Overall, I think this is a really neat foray by Nisei into the Crim virus design space with a strong derez effect that fits neatly into the blue colour pie. It’s not quite like anything that’s appeared in the game before and I’ve had a blast playing with it so far.

P.S. Do NOT send me screenshots of this review if in 3 months time this card is being blamed for ruining the game.

It didnt even take 3 month ;) (though I dont think that deck k

Tranquilizer is far and away the strongest derez effect in the game as of System Gateway. It costs two creds to install but takes two turns to 'charge' its derez, effect subject to purging. Support such as Cookbook, Hivemind, and Simulchip can mitigate its charge-up time to the point that the runner can, after buildup, instantly derez ice, and Tranq's timing means that even without support the Corp will need to purge every other turn to avoid a derez. This is pretty dang strong, but what really sets Tranquilizer apart from other derez effects is its ability to use its effect without ever interacting with the Corp. Most other derez effects require previous interactions in the form of runs to utilize their effects. Those that don't, have either a prohibitive cost or caveat associated with their effects. Tranquilizer has neither of these limitations, allowing for some truly disgusting lategame lockdowns such as threatening of 3 consecutive, instant derezzes, anywhere on the board while also allowing for powerful value plays in the early to midgame.

I suggest you try Tranquilizer out.

Absolutely terrific card. Low effort for the Runner, huge effort for the Corp. Maybe they take a turn off purging, or maybe they let it ride and you get 4-8+ credits out of them for a re-rez. Either way, I think this is pretty overtuned as far as the new cards go. For example in System Gateway if your corp opponent has an advanced Pharos you can more or less forget about it.

And if Acacia is alive and kicking it's basically free money (or the threat of it)!