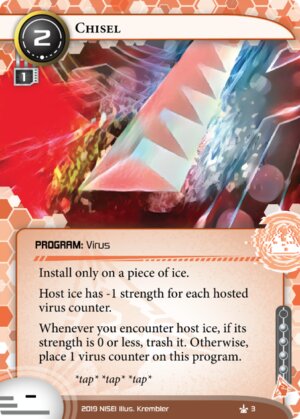 Install only on a piece of ice.

Host ice gets -1 strength for each hosted virus counter.

When you encounter host ice, if its strength is 0 or less, trash it. Otherwise, place 1 virus counter on this program.

*tap* *tap* *tap*
Illustrated by Krembler
Decklists with this card

(system core 2019 perspective) Ever wanted to bang a piece of ice with a stick of toblerone until it shattered? Well now is your chance!

I would like to think that this card and Femme Fatale are the best of buds. Femme takes care of ice that have high cost, high power and low number of subroutinrs, while toblerone takes care of the high cost, low power ice. Glacier decks beware! (Huh. Who was that? Probably just the wind

With enough deck recurrence such as Test Run and Retrieval Run, this card can be used to get rid of pesky low cost ice such as Afshar, Rime and Congratulations!. Heck, with enough deck recurrence, this card can be used to blast through low impact gear check cards such as Wall of Static and Enigma. You thought that one ice could protect your r&d for a few more turns? NOPE, your server is naked and I just played The Maker's Eye

I feel like this card creates a really interesting set of questions to answer: Is this ice worth chiseling? Should the Corp spend his turn clearing virus counters if chisel is installed on an expensive piece of ice?

With this in mind, one of the keys of this card would be placing the Corp in a situation where cleaning the virus counters or leaving the counters be will both result in a situation that is pretty annoying for them the corp. How this can be achieved, well, I am a bit of a noobie so I don't know a good answer to that. Maybe threatening multiple servers, one with chisel and one with other resources, will be the best way for using this card.

I would like to take a second to appreciate how well the art, name, flavor text and mechanic of this card go together. Kudos to NISEI for such a thought provoking and nicely designed card

(Downfall era)
Sir Janksalot 17
Looks like you've got The Nihilist confused a bit. It places 2 virus counters on itself, not the virus program. — BlackCherries 20 Mar 2019
Anyways, if we're really talking System Core 2019-only, then mention should be given to memory consideration. In the core, Anarchs are generally going to be stuck with 4 MU already being filled up: their 3 icebreakers and Sucker. Therefore, it's best to play this with a few Akamatsu MemChip slotted so you won't have to worry about MU issues ever. — BlackCherries 20 Mar 2019
Oh dear, yes, for some reason I thought nihilist worked like Grimoire. I'll delete that part of the review. And yes, you are right, this guy will demand more memory to be used reliably — Sir Janksalot 20 Mar 2019
2

Chisel just got a whole lot better with the addition of Devil Charm in Uprising. No more waiting around for counters to built up! -6 strength deals with most ICE and with Simulchip you can recur your Chisel as well. Thankfully Devil Charm can't be recurred. The question of the corp purging virus counters as a counterplay comes up very rarely in my experience, as you want to get the ICE destroyed as soon as you lay down the chisel (using multiple runs, if necessary).

This card also confirms that much of the design space NISEI explores in Ashes is driven by a form of nostalgia. We know that Parasite was broken, but what if it wasn't? Only time will tell. For my part i was happy with Hippo and thought the archetype got enough support already.

I was thinking about the Devil Charm Chisel combo and was wondering if that would work? So you have Chisel on some ICE and you encounter that ICE. Is it about what order you fire "when you encounter"? So first you encounter ICE, fire DC then encounter it with Chisel? Or do all encounters happen simultaneously? Just looking for some clarity on this. Thanks.

It fires exactly as you describe. Because you are the runner and it’s your turn you can decide what order everything fires in. So yes, you encounter ICE, fire Devil Charm first then Chisel to destroy the ICE before it fires any subroutines.