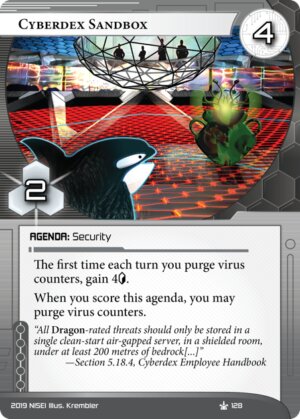 When you score this agenda, you may purge virus counters.

"All Dragon-rated threats should only be stored in a single clean-start air-gapped server, in a shielded room, under at least 200 metres of bedrock[...]"
-Section 5.18.4, Cyberdex Employee Handbook
Illustrated by Krembler
Decklists with this card

They are right to fear...

There are two different (and non-exclusive) ways of looking at Cyberdex Sandbox.

The first is as a piece of tech hedging against virus decks. It gives you a free purge on score and repays the credit cost of the score (but not the clicks!), and it makes future purges forced by threats such as Medium less of an economic setback by compensating you with 4. Compared to Cyberdex Virus Suite, the existing neutral standard for virus hate, you get a more reliable and repeatable upgraded purge ability, and your tech card takes up an agenda slot, which is generally better to make sure you get enough space for plenty of ICE, economy, and other utility cards. While Virus Suite charges you 3 and a for a manual purge, it is also an ambush which can shut off Archives from Datasucker or Aumakua counter farming. The fact that you can purge with a pre-installed CVS also makes it a shoe-in against Clot if that card is likely to hamper your fast advance plans.

The second is as an economy agenda that immediately somewhat compensates you for scoring it, and then offers a slight improvement over spending on basic "take a credit" actions. This isn't fantastic, but I think it does compare favourably to the now-rotated Gila Hands Arcology; the immediate buy-back of 4 makes scoring much less painful, although it probably takes two or three more manual purges to actually be economical. Not great though when Corporate Sales Team pays out 10 without demanding any additional clicks, and it pays that out relatively quickly too. If you just want cash, Corporate Sales Team is virtually always better, and it is even the same advancement requirement to points ratio.

So, if you're going to play Cyberdex Sandbox, you have to want the purge and not just the credits. If you're playing a lot of fast advance, Cyberdex Virus Suite is still going to be your first choice of virus hate, but Cyberdex Sandbox can carry tempo and glacier decks further by offering repeated economical purges. Of course, if Freedom Khumalo: Crypto-Anarchist somehow becomes the runner meta you could play both, and if you don't need virus hate at all, then you don't need either.

One final note is that Cyberdex Sandbox, over all other virus hate, actually self-synergises and rewards you for purging through other card effects, such as Macrophage and Reverse Infection. You score a second Sandox and now you get 8 and you can spend for 8 again whenever you want! Maybe you do want to play both Cyberdex Sandbox and CVS after all! While this sounds like a huge deal and a powerful way of playing this card, I actually think this is at best a fun gimmick, and at worst an outright trap. It is not easy for most corp decks to stomach multiple 2/4 agendas, and there are plenty of others you can score twice (like Nisei MK II or over-advanced Project Atlas) that can straight up win the game and don't demand going all-in on virus hate that will be largely dead in some matchups or until you score your vulnerable 2/4. All Nisei MK II needs to support it is some good taxing ice and a functional economy, and unlike Reverse Infection, you were probably playing those anyway.

Cyberdex Sandbox is the source of the Cyberdex trick. Once score, you will never click for credits. You'll purge, giving you 4 credits for 3 clicks. Additionnaly, any purges will give you 4 creds. Cyberdex Virus Suite become a trap giving you creds. Reverse Infection become better than Hedge Fund. Macrophage has the potential to give 4 creds at every runs. Pretty good.

On top to this, it become the ultimate viruses hate. Purging become something you want to do.

It gets better. This is a neutral agenda. Cyberdex Virus Suite and Macrophage are also neutral. Which mean you can pull the Cyberdex trick with any ID. And if you use Jeeves, you can purge, gain 4 creds and still have 1 click to do something. How much crazy can this get!

Furthermore, if you 2 (or even 3) Cyberdex Sandbox scored, purging will give you more creds than any burst econ card. I-N-S-A-N-E.

The only thing that is keeping this agenda from being more widely used is the 2/4 part. 1/3 and 2/3 agendas can be scored in a turn or even from hand. 3/5 agendas are just more efficient in term of ratio click to points. 2/4 are the worst of the bunch (I'm not talking about 6/9 and 2/5 here, they are specials). 2/4 agendas require special care, because you cannot score them easily and they do not protect themselves like 3/5 agendas.

But what Cyberdex Sandbox lack in self protection is more than made up by powering up the corp. If you build you deck around Cyberdex, Aumakua and viruses using program (Pelangi, Yusuf) become useless. Freedom Khumalo become an almost blank ID. Program that get trashed by purge (like Tapwrm) become impossible to profit. Because Purging is design to cost the corp their turn. But now, you also gain creds from it. It is good enough that you might be purging even without any viruses on the board. To top it off, once you score Cyberdex Sandbox, you gain back all the credits used to score it. That is a lot of tempo.

This is an incredible agenda. It shutdown so many runner plans and speed up the corp. At top tier agenda, in my opinion. Also, I really like orcas (killer whales).